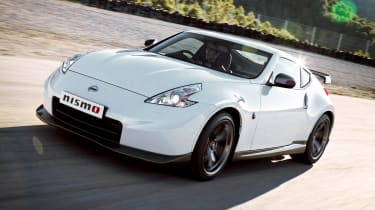 Nissan has confirmed further details of its 370Z Nismo sports coupe. Priced from £36,995, it boasts an extra 13bhp over standard, at 339bhp, as well as sharper suspension, stronger brakes and a rather unsubtle bodykit (main picture, in white). There’s also a sports exhaust to boost the 3.7-litre V6 engine’s soundtrack.

The suspension rides 10mm lower and is 15 per cent stiffer than the standard 370Z, while stopping power is boosted by high performance brake fluid. The wild styling serves a purpose, too, with the bold bumpers and spoiler said to contribute to Nissan GT-R-rivaling downforce levels at speed.

It’s the second mainstream Nismo model following the Juke Nismo hot hatchback, with a GT-R Nismo in the pipeline to act as a headline-grabbing halo model to Nissan’s official performance brand.

In tandem with the Nismo’s release, Nissan has updated the standard 370Z Coupe and Roadster, making them more competitive with new competition, including the less powerful Toyota GT86 and Subaru BRZ and more premium Porsche Cayman.

Priced from £26,995 - £3005 less than before – the 2013 370Z (pictured right, in red) gains fresher front styling, including daytime running lights, new alloy wheels and an increased range of colours. It’s now pitched just £2000 pricier than the GT86, while possessing two more cylinders, 1.7 extra litres of engine capacity and another 129bhp, with 326bhp to its name.