Nissan’s future plans have been laid out, and they include a new Z sports car 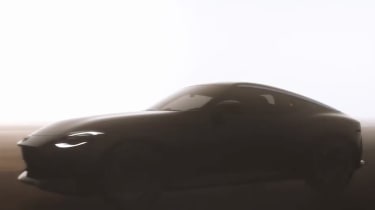 After being embroiled in controversy with its Alliance partner Renault over Carlos Ghosn’s arrest and subsequent escape from Japan, Nissan has now turned a corner in revealing a roadmap for its future model range. The plan focuses on global models, EVs and most importantly, a new Z sports car that could carry the ‘400Z’ nameplate.

Rumours have been persisting of a Z reboot for a while now, with Nissan even testing an early prototype wearing a 370Z body on the Nurburgring, but this is the first time that the Japanese marque itself has officially confirmed that work on a new sports model is taking place.

Revealed at an investor conference, a teaser of the new coupe has given us some valuable insight into what form the future Z will take. Right away its cab-rear silhouette, defined by a long bonnet and short tail, faithfully references the original 240Z.

The nose is clean and simple, with a large grille opening and curved daytime running lights drawing up to a relatively upright windscreen. Blacked-out A-pillars create a quasi-wraparound look for the glasshouse. The flat sloping roofline is more angular and rigidly-surfaced than on the 350Z and 370Z, accentuated by a flat piece of brightwork above the window line. The rear quarters are less curvaceous than those of its immediate Z-car predecessors, once again mimicking earlier Z models from the 70s and 80s with a flat, almost Kamm tail-like rear end. 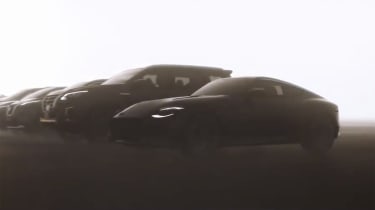 What exactly will power this new Z coupe is as yet unknown, but Nissan’s R35 GT-R-derived VR30DDTT turbocharged 3-litre V6 petrol engine (as found in the Japanese-market Skyline saloon and Infiniti Q50/Q60 twins) is one candidate, with plenty of scope for high power applications. In that engine’s current applications, power is rated at up to 394bhp, a figure that would place the new Z right in the crosshairs of sports coupe rivals like the Toyota Supra, Porsche Cayman GTS 4.0 and Audi TT RS. Alternatively, the 1.8-litre turbocharged four-cylinder from the Alpine A110 and Renault Megane RS could also be utilised, making for a less costly rival to smaller sports models like the incoming Toyota GR86.

Nissan also previewed a variety of other new SUV and commercial models that Nissan is hoping will allow it to regain crucial market share in domestic and North American markets. Despite the complicated dealings with former chairman Carlos Ghosn, Nissan has also reaffirmed its dedication to the three-way alliance between itself, Renault and Mitsubishi in a unique set up that keeps each of the manufacturers fiscally independent. If this renewed emphasis on both its own model range, and highly profitable markets brings back the Nissan Z, then we’re all for it. It seems the sports car isn’t in quite such bad shape after all.