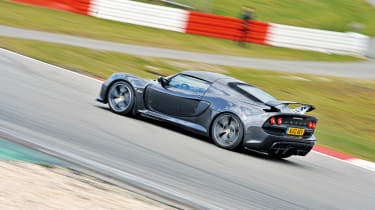 It’s payback time. Payback for the lack of practicality, the awkwardness of entry, the paucity of equipment, the chunter and whine, the robustness of ride and, most of all, the fragility of grip on cold, wet, lumpy roads. The Nürburgring should feel like home for our bunch of hard-edged road racers. It certainly felt good when we rumbled into town yesterday evening and out of the drizzle loomed the Zeppelin-like frontage of the new Nürburgring Boulevard. We felt properly attired, like wearing a red shirt at Old Trafford.

Steak on a stone and a couple of beers in the snug atmosphere of the Pistenklause rounded off a fascinating day. A fellow Brit and evo reader wandered over to say hello, identifying us each in turn until he got to sports car ace and Le Mans winner Andy Wallace: ‘…and I’m guessing you must be the photographer…’

Sunday dawns dry. Ish. Well, it’s not raining and there’s a stiff breeze, so we might be lucky. It already feels like we’ve won the lottery when we line up all five cars shoulder to shoulder in the car park at the main entrance by the Döttinger-Höhe straight. Usually you end up casting envious glances at seriously tasty kit prowling the car park but not so much today, though I’m strangely drawn to the three-door Sierra Cossie (white). Hard to believe its turbocharged 204bhp felt wild back in 1987.

There’s the usual spread of 911s and BMWs but the mix has changed in the last few years, the notable additions being Suzuki Swifts (for hire) and lots of Renaultsport Méganes – holding the front-drive lap record does gain you credibility. The barrier goes up at 9am on the dot but for the time being we’re staying put; let other people discover how cold, wet and green the Nordschleife is.

Conditions are only slowly improving, so resisting temptation – or maybe just removing it – we relocate to the Grand Prix paddock for detail photography and, as a warm-up, a few laps of the wide, safe and technical GP circuit. You can buy 20 minutes for about 40 euros, which is a good way of warming up for the big one.

It’s time. No matter how many times I come to the Nordschleife I always get nervous before the first lap of the day. Which is the best car to start with? Not the Porsche; got to build up to that. Exige? Too low for a sighting/installation lap. Nissan? I want to know what the surface feels like and I’m not sure the GTR will help there. So, it’s the uncomplicated charms of the Merc or BMW. Bovingdon makes the choice easy: while I’ve been dithering he’s already put in a lap in the C63, warming up its Dunlop ‘Race’ tyres.

The sense that this AMG is a bit too plush for a Black Series is even more acute here. You can dial up a whole raft of fluid temperatures and all sorts of other info to the central display but the inescapable fact is that it feels plush and bulky threading through the wiggle of cones out onto the straight. Then you squeeze the throttle and instantly it doesn’t. That’s one huge heap of power doled out by the big, 6.2-litre V8, and on the upshift it ka-booms! like a small cannon has loosed one off at any would-be pursuer. Not much can match its straight-line pace.

Tacking through the first few corners, the relative softness of the C63 compared with the Porsche and BMW in particular is there in the steering, the gearshifts and the seat-of-pants feedback. It’s a bit of a surprise, then, to snag the inside kerb at the end of the Hatzenbach sequence and feel the Merc launch firmly off it. The ride feels very stiff laterally through some of the very quick sweeping corners later in the lap too, rocking tautly, but otherwise it’s fast, grippy and impressively neutral.

I switch off all the aids into some of the more obvious places but, unexpectedly, the Black refuses to come unstuck at the rear. Impressive, though you can’t help thinking that it has coped with the challenge rather than revelled in it. Bovingdon agrees: ‘You do feel like you’re preserving it, stroking it along so as not to really excite too much weight transfer.’

There aren’t many modern cars without power steering, so the first exchanges in the Exige are spent adjusting to steering that starts off heavy and then magically lightens. There’s a stark contrast with the menacing Merc, the Exige feeling low, light and keen, and dynamically it sets its stall out early, the first few corners describing a light nose and heavy rump, which tempers my enthusiasm a little.

Catchpole chose to bag his first laps of the Nordschleife in three years in the Exige, and loved it. ‘That brilliant steering was very reassuring in drying conditions – it lets you feel your way around the circuit,’ he says. ‘When you’re nervous about how much grip there is in some sections –    basically everything between the bridge and the gantry! – it gives you a lot of confidence, and the excellent DPM stability control was a real boon too.’

We often describe Lotuses as being prescriptive and this one is too; drive it moderately quickly and it feels good, but drive as hard as that glorious V6 will allow and the car becomes intimidating, as Jethro describes: ‘You eventually run into persistent understeer. Go beyond that… well, I’m not sure you want to go far beyond that here.’ I also find the steering forearm-burningly heavy in the quick stuff, where I’m soft pedalling because I don’t want to get the mass behind moving.

That said, it was surprisingly controlled over the limit on the GP track, and I’d much rather lap here in this than the similarly configured German-built Artega spotted in the car park. The Lotus doesn’t defy physics but it is an enjoyable thing, and Bovingdon did manage to keep the M5 Ring Taxi in his sights for a whole lap.

The car I was most nervous about lapping was the 911, but as on the road, so on the track. Despite being rear-engined, the Porsche manages to disguise its weight distribution better than the Lotus, and of all these cars, this is the one that is completely in its element here. It feels born for this challenge – it absolutely pings with tautness, power and control.

The moment I nailed the throttle I had the feeling the RS was going to be faster than me, and I was right. Then the Michelin Cups warm up and the lightness at the nose doesn’t matter; the front spears for the apex decisively, every time, and the rear hooks up and lays down everything that astounding flat-six can deliver. But finding the limits of this car on warm Cups feels a bit like pushing through your comfort zone in an aero car – it’s a leap of faith.

One lap isn’t enough, but Bovingdon and I have both concluded that three would do it. ‘It’s incredible,’ says Bov. ‘Love the steering and the ceramics – great feel, total consistency – but the engine and grip dominate. It’s probably too fast for all but the very best drivers. I don’t think I could do more than three laps here without thinking I’d massively pushed my luck.’ Indeed. To get the best out of the RS 4.0 on the Nordschleife I’d have to be on the grid with a team to impress.

The M3 GTS is simply not as fast as the RS. When the barrier rises again, Bovingdon is in the Porsche and, for about half a lap, I’m in touch in the BMW. I can see his confidence grow and, as it does, so does the gap between us. But I don’t care because I absolutely love the M3. Like the Porsche, it feels sharp, steely and direct, but unlike the Porsche it is unambiguous, transparent and predictable: you can drive it right to the limit, and then overdrive it precisely.

The uncomplicated way it goes about its business is the joy of the M3. The limit of grip is not an edge; you don’t fall off it, you get to it and the rear moves smoothly beyond it and you wind on the right amount of lock and carry on, in much the same way you would in a Caterham Seven or a kart. It feels like it would do it all day, too, the urgent V8 feeling unburstable and DCT taking away any worries about mis-shifting. It highlights how clumsy and distracting the 911’s tight, short-throw shift and sharp clutch can be on a track.

There is one better drivetrain here, though, and it belongs to the GT-R. From the off the Nissan feels more like the Merc than any other car here – the tall-ish build, the obvious mass, the lateral stiffness – but after a few corners you realise that it’s like nothing else, full stop. A few tentative pushes early in the lap reveal that it’s not just a car that’s happy playing on the limit, it actually works best there.

It sounds and feels all wrong, but to get the best out of the GT-R you have to get a reaction from it, give it something to cope with, to invoke the active-four-wheel-drive chassis. Understeer doesn’t exist, the GT-R just turns, and this will get the tail moving, which is when you get back on the power. Yes, now. The boost hits, the weight shifts rearwards and the next thing you’re catapulting up the road, everything straight and in harness, the gearbox shuffling seamlessly up the ratios, the speed piling on. It’s spooky and sensational all at the same time.

Bov is a big fan: ‘The GT-R feels every bit as crazy as the RS, but it’s a totally different experience. Is it as satisfying as the Porsche or BMW? Probably not. It requires less finesse to get the best from it, but that incredible drivetrain and the way it flows over the nastiest bumps make it an intense, exhilarating experience. And this isn’t some roll-caged monster. You can drive it to the Ring, do a dozen laps and then turn around and do 190mph on the way home. Then trickle to work once you’re back in the UK. Bloody amazing.’

It really does feel like the Track Pack GT-R was made for this very singular track. Other racetracks are available, of course. On the GP circuit it felt heavy, as did the C63, while the Exige was more playful, the 911 more exploitable and the M3… well, the M3 was just as exploitable as it was on the Nordschleife.