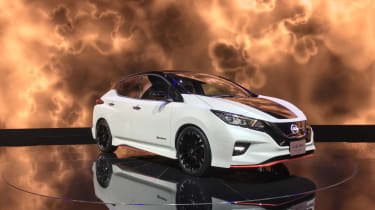 Nissan’s second generation Leaf EV is about to reach European showrooms – and we've driven it here – but not before the manufacturer (tries) to drum up some extra interest with a Nismo concept version. After briefly being shown on screen at a Nissan tech event in Oslo, the Nismo Leaf Concept has now been unveiled at the 2017 Tokyo motor show.

Aside from the aesthetic upgrades, Nissan has confirmed the concept has retuned suspension, high performance tyres and a recalibrated brain improving the response of its electric motor. According to Nissan, these changes deliver a ‘truly exciting drive’, although without any claimed improvement in power or performance figures, we’ll have to take Nissan’s word for it.

Nissan hasn't promised the Leaf Nismo will reach production, but given how heavily based on the production Leaf the concept is, it's highly likely – and Nissan tells us that it is keen to expand the Leaf's remit, with a performance version being an obvious way of doing so. 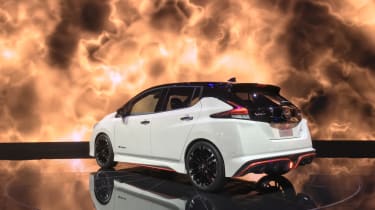 Aesthetically, the Nismo Leaf is not a huge departure from other Nismo models in the range, with the now trademark combination of white paintwork, red accents on the bumpers and sills and two-tone wheels. This is complemented on the Leaf by the black roof (also available on the standard car) and the large black stripe up the bonnet.

Japanese manufacturers don’t seem to be afraid of applying sporting paraphernalia to their electric and hybrid models either after Toyota’s widespread roll out of its Gazoo Racing performance sub-brand. Much like Nissan has done with this Leaf Nismo Concept, Toyota has applied an even more aggressive visual overhaul to models like its Plug-in Prius and even the seven-seat Prius+.