Underrated but quietly influential, here’s everything you need to know about the R33 generation of Nissan’s Skyline GT-R. 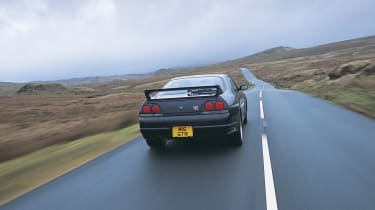 First of the breed officially imported into the UK, the Nissan Skyline GT-R R33 seemed up against it from the word go. It had to follow on from the lauded R32 Skyline and was hamstrung by the power-limiting, Japanese ‘gentleman's agreement’ in place at the time.

Even now, it's often regarded as the black sheep in the GT-R lineage. It didn't carry the same impact as its predecessor, lacked the last-of-the-line finality of the epoch-ending R34 and is totally outgunned by the R35.

However, the R33’s arrival in the ‘90s was well timed. It starred in the opening instalment of the Gran Turismo franchise, in turn endearing Godzilla to the Playstation generation, who helped thrust the Skyline name to cult status.

When the R33’s specification was revealed it left many underwhelmed. The (RB26) twin-turbo 2.6-litre inline six was carried over from the R32 seemingly unchanged except for a pair of turbos constructed with ceramic internals, so power was pegged at 276bhp (identical to the R32). Torque rose, however, by 11lb ft to a peak of 271lb ft. Surprisingly, the minor gains shaved two tenths off the R32’s claimed 0-62mph time of 5.6 seconds.

It was no secret that the RB26 was able to cope with (substantially) more power but the Japanese gentleman's agreement prevented Nissan from realising its true potential. Japanese manufacturers had agreed a power cap of 276bhp for domestically produced cars to satisfy the safety concerns put forward by the Japan Automobile Manufacturer’s Association in the late ‘80s.

Prohibited from increasing power, Nissan spared little effort developing the car elsewhere. On the outside, a new airdam, side skirts and rear-wing lowered the drag-coefficient from 0.40 on the R32 to 0.35.

Beneath the slipperier body sat a more rigid structure: braces – front and rear – tied the suspension strut towers together, a stiffening panel was fitted behind the rear seats and stronger sills featured too – all accounting for a weight gain of around 100kg (over the R32). This, alongside the lack of much extra grunt, was cause for some concern.

The extra heft demanded bigger (Brembo) brakes, ventilated discs measuring 324mm up front and 300mm at the rear (up 28mm and 3mm on the R32 respectively) were fitted as standard. They hid behind 9 x 17in wheels shod with 245/45 R17 tyres – both lower and wider than the R32’s.

To exploit the extra rubber, Nissan revised the four-wheel drive (ATTESA E-TS) and four-wheel steering (Super HICAS) systems, which it claimed improved stability on rougher roads. The suspension was derived and evolved from the multi-link setup found in the R32, offering greater camber stiffness up front and more suspension travel at the rear.

Given the success of the R32 GT-R V-spec, a higher performance version of the Skyline was continued into the R33 generation and it arrived from launch. It featured uprated suspension with stiffer spring and damper rates and a ‘Pro’ version of the ATTESA 4WD that included an active limited-slip differential. There was also another N1 version for Japanese domestic racing.

In 1996 the LM Limited arrived to commemorate the GT-R coming home tenth overall at Le Mans in 1995 – all were painted Champion Blue and featured the N1’s bonnet and front bumper ducts, along with a carbonfibre rear spoiler.

> Nissan Skyline addiction – one man and his many GT-Rs

In 1997, 100 V-spec cars were modified by Middlehurst Nissan in the UK and sold by Nissan under SVA rules. Changes included a 180mph speedo, UK-spec bumpers, and additional coolers for the gearbox, rear differential and transfer box.

The ultimate R33, bar the one-off homologation GT-R LM, was the Nismo 400R of which 44 were built. Benefiting from a comprehensive list of motorsport-derived upgrades, the 400R wanted for nothing in terms of performance. Out went the RB26 and in came the Le Mans proven, Renik-built 2.8-litre RB-X GT2 engine. It boasted a reinforced block, forged crankshaft and connecting rods, a new engine management system, optimised cylinder heads, revised intake and exhaust systems (titanium from the cats back), an air-cooled oil cooler and new intercooler. The result was 395bhp and 346lb ft of torque; a 186mph top speed and a four second 0-62mph sprint time.

Thanks to their shared powertrain there's an obvious similarity in feel and character between the R33 and its forebear. The five-speed manual gearbox has the same oiled, mechanical feel and measured, satisfying weight, while the engine delivers a solid slab of torque that moves you down the road with endless enthusiasm. 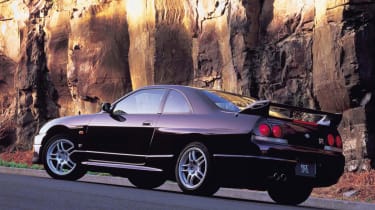 Despite the weight gain, it feels like a light car than the R32. Indeed, far from reining in the R32’s initial sense of dynamic instability, the R33 accentuates and exaggerates it, tuning in with greater urgency and feeling even more keen to adopt that odd ‘on castors’ cornering attitude. It’s harder to get your head around than the R32 because it doesn't feel or behave like  conventional four-wheel-drive car, but neither does it behave like a conventional rear-wheel-drive car. You don't need to provoke it into sliding, and on cold, wet roads you feel it moving beneath you, the four-wheel steering and four-wheel drive going strange things to induce yaw in low-speed corners.

It’s all harmless fun an effective too, but because the car feels so mobile at modest speeds you doubt it will find more stability in the higher speed curves. Again the trick is to trust it and show some commitment, and though it would be a lie to say I managed to so do consistently during out day in the mountains, it would also be a lie to say I don't have a great deal of fun. What you can rely on upon immediately are the brakes, which have more power and frimer bite.

If ever an engine needed to be tuned with freer breathing and  tickle more boost, it’s the RB26. The 400’s six is different. It still feels like a big, heavy engine but the throttle response is keener even when the tubros are only just waking up, and from around 3500rpm to 8000rpm it chomps through each gear with a delicious roar overlaid with the hissing of the big cold-air intake system and the whistle and chirrups of the turbocharger plumbing. It sounds like a living, breathing monster of an engine and creates a character at odds with the technofest you might except. The chunky five-speed ‘box just adds to the physical drama of extracting the 400R’s performance. 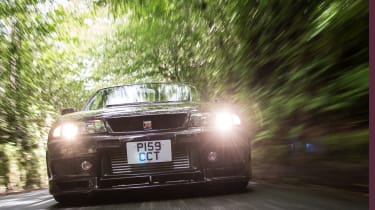 The 400R can, at first, feel slightly wayward and always requires space and a dose of bravery to really explore. So the 400R turns in with real assurance, the rear-wheel-steer system, effectively shortening the wheelbase. Body control is good, the car turning and setting on one clean action. But from mid-corner things get a bit spooky Instead of keeping that lovely neutral feeling, the 400R drives through that phase and quickly into something approximately oversteer. I say that because the rear tyres aren't necessary sliding, it’s just that the steering system seems to push the rear of the car wider and wider. That means no understeer but a slightly unnerving, slightly unnatural raw moment. This sensation takes time to grow used to and even longer to exploit.

However, the 400R never snaps into oversteer and with patience you can tune into its balance and gradually start to pick up the pace until you're throwing everything at it. This car has uprated brakes and they’re sensational’ – the pedal with that solid, heavyweight feel of good racing setup – so you can break right into turns, feel the rear axle drive the front tyres into the corner, and unleash the howling engine.