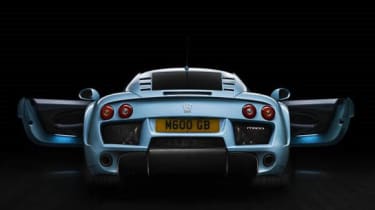 Noble’s new M600 supercar has been revealed in production-spec glory. On the whole, the looks are as expected – the cars that have been spotted testing have been light on disguise, taking any shock out of the styling.

The real surprises come from the price and performance. There’s a 4.4-litre twin-turbo V8 (sourced from Volvo, with Garrett ‘chargers) that serves up 650bhp, which combined with the 1275kg kerb weight ensures a very healthy 518bhp/ton.

There’s even a choice of three ECU settings, allowing you to choose between 450, 550 and the full 650 horsepower. Of course, you’ll want the highest setting, which also unleashes 604lb ft of torque and helps push you towards a fairly staggering 225mph, with 0-60mph taking 3sec. Proper supercar stuff, then.

And there’s a proper supercar price to back it up, too – the M600 is expected to weigh in at around £200,000 when sales begin next year. You do get some nice touches, though – toggle switches inside, a Ferrari Manettino-style car settings switch and alloy wheels similar to the Lamborghini Murcielago. Unlike its Italian foes, though, the Noble will be reasonably hardcore in nature – there’s no ESP or anti-lock brakes and gearbox options are limited to a six-speed manual only.

The Noble M600 gets is public reveal at the Goodwood Revival in September. Keep an eye on evo.co.uk for the latest on this rather extraordinary British supercar.