We’ve all got our favourite corners. Meaden wants to hear yours in the hope that it could become part of something rather special

When McLaren revealed its recent fantasy for a grand prix through the mean streets of Woking, many will have scoffed, but I have to say it struck a chord with me. Not, I hasten to add, because I’ve long harboured the fantasy of hammering through McLaren’s hometown, but because the notion of creating a track out of familiar roads is the stuff that rattles around in every petrolhead’s mind.

Many years ago a creative friend of evo’s suggested we commission a batch of evo-branded road markers (you know, the dayglo-yellow temporary catseyes you often see defining lanes through roadworks) so that readers could proudly – and secretly! – affix them to the asphalt as apex markers on their favourite corner.

It was a great idea. One we seriously considered, at least until the boring legal ramifications were pointed out to us. At which point the romantic notion of coming across a cracking corner in the middle of nowhere with a small rectangle of yellow plastic at which to aim your inside wheel evaporated.

Still, the fact remains: we all have our favourite corners. Some might be a simple, well-sighted 90-left or right that lets you kick the tail out or cock a rear wheel in the air without offending anyone. Even a quiet roundabout in the dead of night has its charm. Others could be an elegant constant-radius arc that rewards a clean, precise and well-timed turn-in. Get it right and once you’ve applied some lock you can steadfastly hold the wheel at that angle and watch as the apex spools beneath you as if by magic. The roads are a treasure trove of memorable turns if you’re on the lookout.

I’ve had lots of favourites over the years. Some I drive almost every day, others I haven’t driven for years, decades possibly. Yet I’m pretty certain one or two runs through and muscle memory would find the sweetest line. Of course, those from my dim and distant youth were taken with possibly a smidgeon more commitment than was strictly sensible, but such is life when you’re exploring the roads and extent of your nerve and ability. I can’t condone it, but neither can I condemn it. What can I say? It was the ’90s.

I grew up on the roads that straddle Surrey and Hampshire. Not classic driving country, admittedly, but there were some decent stretches to enjoy. One of the nearest was what we referred to as the Pirbright Bends. It's more of a prolonged sequence than one outstanding corner, but having just put the name into Google, it would appear to have retained its allure. 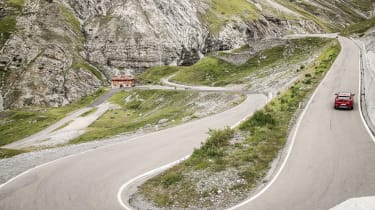 In the very early days – before I landed a job as a motoring journalist – I would relentlessly tear up and down this sinuous stretch of road in my souped-up 1380cc Mini. Often with my mate Tim in tow on his Honda CBR600 motorcycle. He’d get his knee down while I had the Mini on its door handles. We’d pick our moments so it wasn’t busy, and neither of us ever fired ourselves into the undergrowth, but it still makes my hair curl thinking about what we used to get up to on that tree-lined snake of road. Once I got a job road testing, my horizons were broadened, but it became a bit of a ritual to take whatever I had up and down that piece of road, often with Tim in the passenger seat. Being a biker, he was notoriously hard to impress, but he was a useful part of my appraisal process, like an impartial organic VBOX. He kicked the two- wheel habit yonks ago, but the fact he quickly turned to Caterham ownership suggests those corners clearly left a lasting impression.

Returning to the fantasy racetrack theme, perhaps we should pool our favourite corners and persuade the creatives at Polyphony Digital – makers of Gran Turismo – to create an ultimate evo reader road course? It’s a long shot, but they might just go for it.

My contribution? Possibly not what you’d expect, in that it’s not on some remote moor, but a slip road connecting the anticlockwise carriageway of the M25 with the northbound M11. Always taken as a reward after negotiating the homebound horrors of the Dartford Tunnel, this epic combination of corners makes Maggots- Becketts look like a walk in the park. You’d need something downforce-rich like the upcoming Aston Martin Valkyrie to realise its full potential, but there’s something remarkable about the way the almost endless and apparently open right-hand element loops up, then down before turning back on itself, tighter, tighter, tighter like a tarmac tourniquet, before changing direction and releasing you onto the northbound M11 like a cork from a champagne bottle.

We’ll worry about the pixel-perfect rendering later. For now, just send your suggestions to letters@evo.co.uk and we’ll endeavour to put something together. In the meantime, continue to (responsibly) enjoy your favourite corners, wherever they may be.