In a nutshell, the Aston Martin Goldfinger DB5 Continuation Edition is an expensive, largely unusable and deeply naff car for dullards

Have you heard about the Aston Martin Goldfinger DB5 Continuation Edition? It’s a brand new, from scratch, official factory replica of the Silver Birch-coloured car first seen in the third Bond film, complete with actual working gadgets such as the revolving number plates. What an incredibly detailed recreation. What an iconic melding of two eternally linked names. What a sodding awful load of old cock.

Seriously, who thought this was a good idea? Aston is flying high, following the DB11 with the new V8 Vantage and then the DBS in a run of impressive cars that speak volumes about the competence and confidence of the firm under its current management. It doesn’t need this retro nonsense, and certainly not when it’s so horribly tacky. Aston is bigger and better than a character who consistently proves himself to be the worst secret agent in the world, not least because he habitually drives around in an Aston bloody Martin.

The DB5 recreation doesn’t harness 007 chic. It feels more like Aston’s captured the essence of some fat, flatulent bore who goes to ‘gala Bond nights’ at his local golf club, orders a vodka martini even though he doesn’t like them, says that sodding tedious catchphrase to the barman, then makes an embarrassing Pussy Galore joke to a woman he doesn’t know in the belief he’s ‘charming’. But he’s not. He’s a twat, and if he had £2.75million (plus taxes) he’d buy this car even though it’s an awful idea and patently doesn’t have a full suite of ‘working’ gadgets because no one can sell you a car with built-in machine guns, not even in Russia. 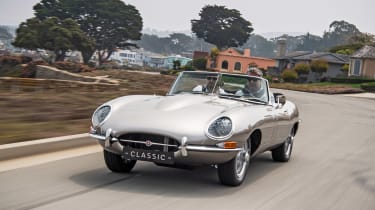 Enjoying a Bond movie is fine, who doesn’t, but people who like Bond too much are the same as people who are a bit too into Star Wars and put ‘Jedi’ on their last census form because they thought it was funny. Worse yet, in its quest to make an ‘authentic’ replica version of a car driven by a fictional man in a made-up film, Aston has hamstrung itself to building these new DB5s to the exact spec of the 1960s original, which means they’ll be cack-awful to drive on the road, if you could do that, which you can’t, because, here’s the kicker, they won’t be road legal. So, in a nutshell, the Aston Martin Goldfinger DB5 Continuation Edition is an extremely expensive, largely unusable and deeply naff car for dullards.

Strangely, I don’t have the same reaction to the electrically powered E-types that Jaguar announced in the same week as the Bond-bore Aston. On paper, this might seem like even more of an affront to history, especially since they aren’t being made from scratch and require the butchering of existing E-types. But let’s not forget, the E-type is not a particularly rare car. Moreover, the electrical conversion has been designed to be reversible. If you want to put back the old straight-six, you can.

But I’m not sure you would because, let’s be honest, most people buy high-end classic cars for the looks and not for the way they drive, which is, let’s continue to be honest, awful. I’ve tried E-types, and though they aren’t horrific, nor are they the most fun you can have without breaking a chair. In fact, through modern eyes an E-type is at its most pleasant going gently and, while the sound of the engine might be part of that pleasure, I can also imagine cruising gently through urban areas of a summer’s evening in a drop-top E-lectric, smiling and waving at people and feeling good about the world while knowing that my motive power made little difference to the overall sensation. In fact, you’ll be more relaxed knowing that the lump up front isn’t about to slip out of tune or boil itself to death. That’s why the electro E is a brilliant idea. If you knew your old Jag was going to work, you’d take it out more often, which would give more people the pleasure of seeing it.

If you’re a purist there’s no need to gnaw at your stringbacks because there’ll still be plenty of these cars in the state they left the factory, but it’s fantastic that a few can be modernised in an intelligent way that more honestly reflects the manner in which classic cars are used and enjoyed. As such, the battery-pack E-type is a clever bridge between heritage and modernity, wrapped in authenticity because it comes from Jaguar itself.

For all these reasons, I find myself wanting a £350,000 electric E-type almost as much as I very much don’t want to prance about in a dinner suit and three million quid’s worth of Innovations catalogue nonsense pretending to be James bloody Bond.