'Keeping your new car's attractive alloy wheels scuff-free isn't that hard - is it?'

Eighty per cent of alloy wheels are scratched to buggery. And I hate that. It makes the car look terrible, and it speaks of carelessness

A few years ago I bought my first ever brand new car. I didn’t mean to. It was a situation that escalated. My wife and I were out for one of those languid, might-as-well-get-a-second-bottle restaurant dinners you can do before you have kids, during which talk turned to her American driving licence and the process of turning it into a British one. She’d been putting it off.

‘Look,’ I said with my nose in a glass, ‘if you crack on with having some lessons and taking your test, I’ll buy you a car.’ I think I meant a 600 quid Yaris or something, but this somehow became a used Fiat 500, and then I tried the TwinAir engine that had just come out and that’s where it all got more expensive. I tried to claim my wife tricked me, but really I manoeuvred myself into a place where it seemed a good idea, and that place was a Fiat showroom.

‘Look,’ he said firmly but politely, ‘it’s a new car. You can have whatever you want. We’re going to build it from scratch just for you.’ 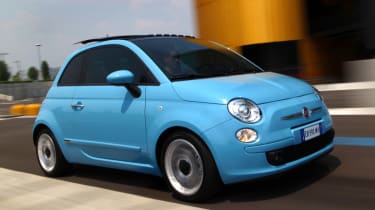 In truth, there was only one thing I definitely wanted and that was a specific style of optional wheel which, to my mind, looked like something Lamborghini would have designed a few years ago. If I was paying for this car, and if I was going to gaze upon it from my living room window, I wanted it to have those cool alloys. ‘You can have the cool alloys,’ said the salesman, and I went away happy.

‘No, no, you misunderstand,’ I replied. ‘I don’t like grapes and people who say “myself” when they mean “me”. This is much stronger than that. This is cauliflower cheese and parking a BMW X5 diagonally across a disabled bay when you have no disability. This is “My Humps” by the Black Eyed Peas. This is how much I hate kerbed wheels.’

Around this time she started practising for her UK test in the Fiat and I told her off for slipping the clutch too much. I mentioned both of these things to evo person Henry Catchpole who listened intently to my tales of pedantry and mansplaining and then quietly muttered: ‘I’m amazed she’s still with you.’

I don’t like getting relationship analysis from a man who looks like an Edwardian tramp so I stopped griping about glazing the clutch. But the kerbed wheel reign of terror wasn’t going away. Kerbed wheels are a terrible blight on any car. Next time you’re walking down the street or through a car park, look at the alloys on nearby cars. Eighty per cent of them will be scratched or scarred or scuffed to buggery. And I hate that. It makes the car look terrible, and it speaks of carelessness and sloppy driving, as well as an idleness in not getting the damage touched up. So that’s why I hate kerbed wheels.

Not long after we got the Fiat with its mini-Lambo wheels and its leather gearknob and its mysterious dashboard rattle that turned out to be a hidden nut that hadn’t been done up properly, we were heading down our street, me driving, my wife in the passenger seat, when I spotted my friend and sometime YouTube colleague Jonny Smith walking up the pavement.

‘Look! There’s Jonny!’ I said excitedly, and pulled over to say hello. There was a drop kerb with a particularly jutting slanted stone at one end. I wasn’t paying attention. Would you believe me if I said it was really foggy?

Anyway, because of this and that and whathaveyou, as we pulled up to the side of the road there was the kind of horrendous grinding sound that only comes from a circular metal thing meeting a solid stone thing and coming off considerably worse. There was a pause, punctuated only by the imaginary sound of a tediously pedantic man falling from the moral high ground. ‘Hmm,’ said my wife, fighting a smile. ‘Are you going to get that repaired then?’

Since the Fiat I’ve only once bought another brand new car. It’s on steelies.