Harry Metcalfe's Zonda gives him a rather unwelcome surprise. 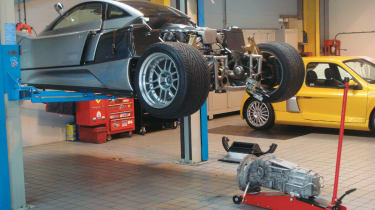 Oh dear. The last month with the Zonda hasn’t gone quite to plan. As I’d been on holiday for the best part of the whole of August, the Zonda hadn’t had a lot of use. Well, none at all to be precise. It’s not the best family-carrying device for a start, especially when you’re heading off to Devon, a county whose roads are narrow enough to challenge a supermini, let alone a supercar.

So I’d been looking forward to my first day back at Evo Towers – a lot. Because ahead of me were 65 miles of pure Pagani silliness.

Finally back in the Zonda’s glorious cabin, the starter engages with its familiar, frantic whirl. POW! The twelve cylinders explode into action. Oh, that sounds seriously good. Into reverse, then pause to plug the phone charger in.

Strange. The little red LED isn’t on. Fiddle with the plug again and… Woah! The Zonda and me are involuntarily shot backwards out of the barn. I’ve still got the clutch pedal pressed fully down, yet drive is getting to the wheels. I’m frantically pressing the brakes, but the now locked front wheels are just skidding on the gravel – 7.3-litres of AMG muscle at a fast idle doesn’t stall too easily. Finally my brain engages and I twist the key to kill the engine. We’ve travelled about ten metres. What on earth just happened?

The explanation comes when the clutch is inspected a few days later. The hydraulic mechanism, hidden deep inside the bell housing, had sprung a leak, causing the clutch to engage of its own accord – and me to gain some new grey hairs as a result.

At least stripping a clutch out of a Zonda takes no time at all. Two bolts and the rear clamshell is off, another four and the underbelly is released, six more and the whole exhaust system can be removed, leaving the gearbox completely exposed. These are the sort of details you get when an engineer designs a car, not a stylist.

It didn’t take long for Mr Pagani himself to find out what happened, and he was very concerned. Zondas don’t do this sort of thing. As a gesture of goodwill he has despatched upgraded components from the Zonda F, which is nice. It might mean waiting a little longer for my car to return, but I’ll end up with a lighter clutch action once it’s all fitted. What is it they say about every cloud having a silver lining?