Harry Metcalfe has been discovering what it's like to be a celebrity. It's called the Zonda effect. 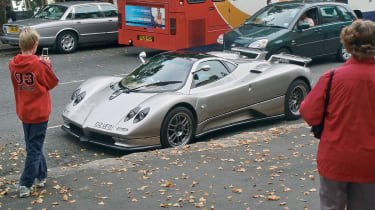 Me and the lovely Zonda have been going steady for five months now, and I’m very happy to report that the initial rush of excitement has yet to wear off; every morning a torrent of adrenalin flushes through me as that mighty engine roars into life.

It’s not all sweetness and light, though. There’s one thing about driving a Zonda that I hadn’t anticipated: it’s not so much a car, more of a celebrity. Call me naïve, but I thought it would be just me and the Zonda each morning, enjoying the perfect commute through 65 miles of English countryside.

The reality is somewhat different. Every journey in the Zonda is not just a matter of getting from A to B, it’s a very public performance. Most days the show gets going at around 8am and ends some 90 minutes later. For those who miss that one there’s a repeat showing at the end of the day, only this time played out in reverse order.

There’s plenty of audience participation during the performance, too, with a constant jockeying of cars around the star, most of them containing people holding camera phones primed and ready to deliver a grainy image of the Zonda trapped in traffic.

I can sort of understand the attention. After all, I’ve got my own collection of snapshots of exotica that I started taking way back in the ’70s, and I can vividly remember chasing a Ferrari 456 round the streets the first time I saw one on the road. For some reason, seeing a supercar outside the confines of a showroom and away from the dazzling lights of a motor show is a special event for many of us, but the level of interest in the Zonda has taken me completely by surprise.

Trouble is, when you stop for fuel it can really start to get out of hand. Most times people wander over to take a closer look but then don’t know what to say, a common opener being ‘What does it do to the gallon?’ For goodness’ sake! I can’t help thinking that’s not really what they want to know, it’s just the first thing that springs to mind when they see a supercar beside a fuel pump.

Another favourite is ‘What on earth is it?’ This time I think it’s the colour that confuses people. Everyone knows Ferraris come mainly in red, while Lamborghinis only get painted in colours on the outer edge of good taste, but a wedgy looking car painted silver… what can that be? To be honest, I’m quite surprised by the number of people who are unfamiliar with the name Pagani Zonda. I know the vast majority of evo readers could tell the difference between a Zonda S and a Zonda F from twenty paces, but you’re very much the exception to the rule (which always makes you a pleasure to talk to!).

‘Ah, I’ve never seen a Noble up close,’ one observer remarked (I took a deep breath and counted to ten). Others often ask whether I made the car myself. ‘Oh yes,’ I feel like replying, ‘but only after I’d finished building the Space Shuttle.’

It’s different when kids are around. If you’ve got children of your own you’ll know they have a much more direct approach to questioning. On one occasion I got myself trapped between two coaches on the Eurotunnel (anyone with an exceptionally wide car has to go in with the high vehicles – supercars don’t fit inside the narrower, standard-car carriages). Forty ten-year-old kids spewed out of one coach, quickly followed by another forty from the other, and they all made a beeline for the Zonda. For the next 35 minutes I was completely trapped within a scrum of eighty excitable kids all firing questions at me at once: ‘How fast is it?’, ‘Have you driven over 200mph?’, ‘How much did it cost?’, ‘Are you a millionaire?’, ‘How do you make money?’, ‘Have you taken drugs?’, ‘Do you know Jeremy Clarkson?’ I’m not a celebrity, get me out of here!

The odd thing is that my Ferrari 550 long-termer was completely different. A knowing nod every now and then was the most you received from other road users, otherwise you could drift through the backroads of England seemingly invisible to others for the most part. Not so in the Zonda. Suddenly you become an involuntary celebrity trapped in a noisy four-and-a-bit-metre-long billboard which might as well have ‘Photograph this car!’ written in large letters along the side. That’s a very odd feeling for this rather shy and balding car enthusiast to learn to live with. Fortunately, the Zonda is so very special it’s something worth getting used to, although commuting after dark is another solution.