Harry drives his Pagani Zonda C12S on an epic journey to Pagani HQ in Modena, but once again mechanical disaster strikes 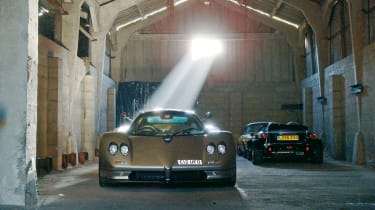 Every time I’ve hinted at taking the Zonda out of its winter lair, the weather has intervened. Take yesterday. It may have been sunny, but there was a frost the night before so the gritters had been busy all night, and mixing salt with a Zonda is a bad idea. Its body may be rot-free carbonfibre, but this car is such an intricate device the salt simply attacks everything else: rose joints, the aluminium suspension, basically every single part of Pagani’s wonderful engineering. And cleaning this car is a huge task; grime gets into every nook and cranny, and then the nooks on the crannies need cleaning too.

But this morning is going to be different. I’m taking the Zonda out for a drive, come what may. It may be frosty outside, with a forecast of snow in a couple of days, but I don’t mind – by then I’m going to be sipping a glass of Chianti somewhere in Italy. God, I’m excited about this trip. I hardly slept last night. This is the start of this year’s big Zonda adventure.

Last year I tried to use C12 UFO just like you would a normal car, but it didn’t really work out. All that happened was I got frustrated at driving a hypercar around our crowded corner of England, feeling trapped and never really able to enjoy the car for what it truly is.

OK, there were a few memorable drives, the last being in late December when I braved central London traffic to attend an awards dinner. Leaving the bash at around 2am and driving home through the deserted streets was amazing. Just me and the Zonda, with that snarling V12 behind for company. It was all very strange. Like being in some weird computer game, but this time for real.

But such magic moments were rare, and over Christmas I decided to take Horacio Pagani up on his kind offer to leave my Zonda at the factory for a while. That’s the amazing thing about Pagani, it’s like an extended family. I even got a text from Horacio on Christmas Day to wish my family a very happy Christmas and great New Year. I was touched. The creator of my dream car had taken the time to send me a text. I can’t think of any other car company where that might happen, yet Horacio regularly texts owners of his cars.

My plan is to take a couple of days driving the Zonda over to the factory. Once there, they’ll carry out a service, renew all the brake discs and give it the general once-over. Then, in a few weeks’ time, I’ll jump on a plane, pick the car up and enjoy some fabulous drives in Italy. Well, that’s the plan.

The Targa Florio route in Sicily is top of the list, as it’s something I’ve always wanted to do. So too is a high-speed lap around Nardo, and perhaps we could join the cavalcade following this year’s Mille Miglia. That little lot should certainly beat trying to commute daily through Oxfordshire.

First, though, there’s the small matter of getting there, and rather than risk the potentially icy Alps I’m going to travel the length of France before turning left onto the mad autostrada that hugs the Italian coastline towards La Spezia, then turning left again towards Palma, eventually ending up in Modena some 1000 miles later.

Travelling at this time of year is great. There’s no traffic around and, as far as I can see, the police seem to be hibernating too. With my trusty Road Angel giving me an accurate speed reading, I keep it steady at 100mph – with 300 euros in cash at the ready should the cops appear. At this speed the Zonda is humming at just 2500rpm, sipping fuel at a rate of 19mpg and allowing nearly 300 miles between stops.

To break up the journey I dive off the autoroute south of Troyes to take in one of France’s scenic ‘Bis’ routes. Now’s the time to extend that mighty V12. Even eight months after the Zonda first arrived, the sheer savagery of its acceleration still gets me every time. The roads are damp rather than wet, but a clumsy stab of throttle at an indicated 90mph will soon get the rear wheels spinning merrily. This really is an amazing car. Yes, it demands respect, but then the payback is huge.

As night falls I pull in to one of my regular stops, the Hotel le Cep in Beaune, which has a hidden courtyard for parking. Beaune also just so happens to be the epicentre of the Burgundy wine region, so a good night’s sleep is guaranteed.

The next day dawns bright and still, and straight after breakfast I head off in the direction of Marseille. It doesn’t seem long before we’re spearing left towards Nice, the outside temperature already 16 degrees – amazing for January. Next up is one of the best bits of the journey: all the fun and games of the Italian Autostrada GP, where frustrated drivers jostle for the best cornering line through the tunnels around Genoa. I reckon this is some of the best racing in Europe. The Punto is the car of choice, it seems.

Then suddenly, out of nowhere, disaster strikes. As I go through one of the pay barriers approaching Italy, the clutch gives up the ghost, the pedal flopping to the floor like it’s lost the will to live, just as it did a few months ago.

I put a quick call in to Pagani to tell them what’s happened and to request a rescue truck to rendezvous with me at the Modena Nord exit. But they drop another bombshell: ‘’Arry, you do know all the petrol stations in Italy have come out on a lightning strike this morning?’ Oh, great…

So, I’ve got no clutch, it’s 480km to Modena Nord, it’s started to rain, and now there’s no petrol on sale in Italy. There’s only around 160km of fuel left in the Zonda, but apparently you can still buy petrol every 300km or so on the autostradas, so I decide to carry on, passing one closed service station after another until, with heart pumping, I finally find one that’s open. Just as well – there’s only vapours left in the tank and it’s 28km to the next stop. Staying the night by the side of the autostrada in a Zonda was not how I wanted to end this adventure. I get going again, moving off on the starter motor, carefully measuring the revs for each upshift.

It’s wet, cold and miserable by the time I reach Modena; my dream drive to the factory has finished on a rescue truck. I cheer myself up with the thought that the factory is the best place for my Zonda right now – this clutch problem is getting silly.

Horacio is getting increasingly distraught over the problem too, as it appears to have only afflicted my Zonda. Tomorrow he’ll start stripping the car. Will he be able to get to the bottom of it? Let’s hope so…