A factory service makes the Zonda feel fresh again, and Harry takes the opportunity for a few spec upgrades... 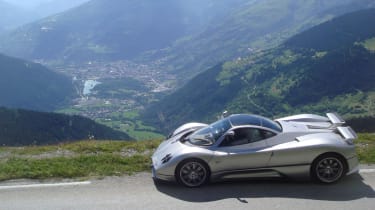 It was the impending MoT that proved the clincher in the end. It was due to run out on August 3 and I’d discovered that not having a current MoT can invalidate your insurance, which was one risk not worth taking with the Zonda. Back from its extended Italian holiday it had to come.

So late one Tuesday evening at the end of July I found myself waiting at a bus stop in Oxford ready to catch the evening bus to Gatwick Airport (bus fare £21 one way, Ryanair flight to Bologna £5.99; go figure). It was a strange way to start the adventure but with a couple of days reserved for the return leg I had plenty to look forward to, especially as my car had just been fitted with another round of enhancements including, finally, the monster Zonda F brakes.

Some 18 hours later and I’m like an expectant father waiting beside my car as the mechanics prepare to peel back the dust-cover and show me the work they’ve done. Wow, those new wheels look a bit sparkly – but it’s what’s hiding inside that I feel like hugging. Monstrous, ludicrous, 380mm steel discs clamped by six-pot callipers, specifically designed for the Zonda F by Brembo.

Trouble is, in order to fit them to my early car, Pagani also needed to fit the bespoke magnesium alloy hub-carriers designed for the ‘F’ (a more exquisite piece of engineering you could hardly imagine) at each corner, which makes this conversion inordinately expensive. Like £23,617.50 expensive. Best not tell the wife about that little detail, I reckon, nor that the upgraded ‘F’ type gearbox (with trick diff, remember) came in at £11,808.75.

Thankfully Horacio has done me a special deal on the 19in Zonda S Roadster wheels and tyres (required because the new front brakes are so big that they can’t fit inside the standard 18in front wheels). A set of four of these big babies would normally cost £9447, but he needed an extra set of original Zonda S wheels at the factory, so a discounted price was agreed.

While the car was at the factory it was also given a full service (£1417.05) and was returned with a revised service booklet showing recommended intervals of 10,000km for engine, gearbox and diff oil changes. Other surprises in the latest service book were that new spark plugs are only needed every 60,000km but the fuel tank needs changing every ten years. Having heard horror stories about the cost of performing this operation on the Ferrari F40 and McLaren F1, I’m going to look into this one a bit further…

I’ve set up a meeting at Ferrari for that afternoon, so first stop after leaving Pagani’s Modena factory is the nearby town of Maranello. I’ve never driven here in a Zonda before, and driving into Ferrari’s courtyard in a rival supercar feels a bit naughty to be honest. The security guard looks surprised too as I brazenly drive into the special visitor parking bays just by reception. There’s soon a gaggle of engineers around the car. Quite what they’re saying I can’t make out but it can’t have been too bad because the car’s still there when I re-emerge some hours later.

After a traditional pasta-fest at the Restaurant Montana that evening, next morning it’s time to head for home. There’s an infinite number of routes back to the UK from here, but for this trip I decide to try the St Bernard pass (rather than using the Mont Blanc Tunnel) as it’s never been open when I’ve passed this way before. If you ever fancy giving it a go, be warned that it’s easy to miss the start of the pass as it’s not well signposted from the Aosta autostrada. But once you’ve found it, the views along the route are spectacular. It might not be the quickest way home, but it’s well worth the extra time if you’re not in too much of a rush.

The Zonda feels super-fresh to drive right now. There really isn’t a squeak or rattle to be heard anywhere, and it’s amazing to think this car is already five years old and has 47,000km showing on its metric-only odometer. It certainly doesn’t drive like it after its extended stay at the factory.

The brakes were bloody good before but absolutely nothing seems to faze them now. Throw an Alpine pass at them, or the odd squirt up to high speeds, and there isn’t a trace of protest to be felt or heard from the pedal. The only difference I can detect since the last time I drove the car on standard wheels and brakes is slightly heavier steering, which I put down to the bigger front tyres required for the brake conversion.

The next day I grab the first coffee of the day and wander over to the barn where I parked the Zonda late last night. Just standing there in my dressing gown, staring at the beast in the early morning light is enough to give me goosebumps. Oh it feels good to have the Zonda back home again.