Peugeot 2008 review - is it just another supermini crossover? - Engine and gearbox

Needless to say, you can probably ignore the non-turbo 1.2-litre petrol with its 81bhp output and head straight for the 108bhp and preferably 128bhp versions of this engine - which have no economy or CO2 penalties either, as they’re actually marginally more fuel-efficient than the non-turbocharged version.

> Click here for our preview of the new VW T-Roc

Of these, the 128bhp car has the greatest appeal, developing its peak output at 5500rpm and a healthy torque output of 170lb ft from 1750rpm. We’ve experienced this engine in several PSA models now and it’s pleasant enough - torque starts to build noticeably from around 1500rpm and there’s a healthy mid-range shove that makes fairly light work of overtaking, but not hugely throttle responsive. It can feel a bit tight towards the top of the rev counter too, but that may improve with miles. 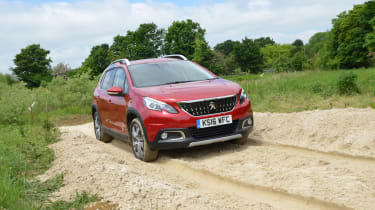 The three-pot doesn’t sound the sweetest but vibrations are kept to a minimum and at a cruise it’s a quiet engine, aided by tall gearing that keeps the revs low at motorway speeds. The same can be said of the diesel. Like the petrol, it’s at its best at low to medium revs (the diesel clatter can become irritating at higher engine speeds) and it realistically feels even stronger - peak torque here is 221lb ft, from the same 1750rpm.

Manual transmissions are standard throughout the range, with five ratios on all but the PureTech 130 and BlueHDi 120, which get six. The six-speeder feels much like that in Peugeot’s GTI models, with a slightly rubbery feel around the gate, but it’s possible to enact fairly swift gearchanges.

There’s also a six-speed automatic available on PureTech 110 models. Badged EAT6 (“Efficient Automatic Transmission”) it’s been developed with Aisin and is a conventional torque converter automatic, rather than the recalcitrant automated manual that PSA has historically preferred on its smaller models. It’s all the better for it - by no means one of the best autos out there, but relatively smooth and responsive all the same.