Peugeot 2008 review - is it just another supermini crossover? - Ride and handling

This is where many compact crossovers go to pot, compromised by their height with either less precision or a less settled ride quality, the latter evidence of the extra firmness needed to keep body movements in check in a taller vehicle.

Peugeot though hasn’t done such a bad job of giving the 2008 a decent chassis. For a start, parent group PSA’s PF1 platform - also used in the 208, as well as Citroen’s C3, C3 Aircross, C4 Cactus and the DS3 - typically results in quite lightweight cars. No 2008 is heavier than 1200kg, and the range starts at just 1045kg, which is more akin to a standard supermini than a crossover.

As a result the 2008 is surprisingly nimble, and larger wheel and tyre combinations in particular (up to 17-inch wheels are available) have healthy reserves of grip. Throw in Peugeot’s i-Cockpit format with its small steering wheel and responsive, high-geared steering and you can have the 2008 diving around with much more conviction than you’d expect of such a car. 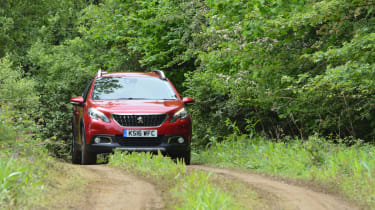 There’s also fairly good balance to the chassis, and while you’ll not feel inclined to throw it into corners as you might a 208 GTI, there’s good front end grip and a sense that the rear wheels are willing to help out too if you lift off the throttle during hard cornering. Traction on the way out of turns is fairly good - no 2008 is overly troubled by its power output - though in the most powerful PureTech 130 we’ve experienced some torque steer, exacerbated by the small steering wheel.

The ride is well-judged too. There is, as we’ve come to expect, an underlying firmness to proceedings which can lead to a jiggling feeling over harsher imperfections in the road, but the suspension keeps larger body movements in check, resisting body roll and dealing with compressions and crests safely and confidently.

We’ve not had a proper opportunity to test the 2008’s Grip Control system - available on Allure models and upwards, depending on drivetrain - but in other cars it’s proved surprisingly effective at dealing with slippery surfaces, albeit aided by the all-season tyres fitted as part of the Grip Control package.