Peugeot 2008 review - is it just another supermini crossover? - Interior and tech

The Peugeot 2008 was the second car to use the firm’s “i-Cockpit” layout, following its introduction in the 208 supermini. It works slightly better in this car than in its initial application, mainly because the 2008’s driving position is naturally a little higher up than that of the regular 208, so the combination of small, low-set steering wheel and high-set dials shouldn’t cause any instrument visibility issues, regardless of the driver’s height.

And without that frequent bugbear, there’s a lot here to like. The seats are well padded, comfortable on longer trips and reasonably supportive, the small wheel gives you access to a darty front-end, refinement is fairly good and Peugeot has generally used agreeable materials throughout the cabin. 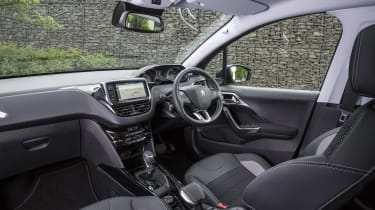 Higher-spec versions in particular do get close to providing the “premium” feel that an increasing number of manufacturers seek, though consensus within evo is that this can often feel a little contrived, and true to form some aspects of the 2008’s cabin don’t quite gel, from the shiny gloss plastic used as dashboard and doorcard trim to the slightly cheap feel of chromed elements that genuine premium manufacturers would make from actual metal. Citroen’s recently-released C3 Aircross, on the same platform as the 2008, has ditched “premium” for something with more honest use of materials and colour, and is all the better for it.

Peugeot’s infotainment system is at least improving, largely thanks to Apple CarPlay integration which generally means ignoring the car’s proprietary functions altogether and making use of your smartphone’s native features. Peugeot, unlike its sister brand Citroen, also separates heating and ventilation controls from the screen with the 2008, so you’re not quite as reliant on the slightly clunky touchscreen to change functions.