Peugeot 2008 review - is it just another supermini crossover? - MPG and running costs

Being based off the Peugeot 208 and using the same range of compact, efficient powerplants and transmissions, the 2008 can boast some impressive MPG figures with up to 76.3mpg, and CO2 emissions of 97g/km quoted for the 1.6-litre Blue Hdi 75, 100 and 120 diesels.

Recreating these figures in the real world will prove slightly more tricky, though numbers in the 50s should be achieveable with relative ease and a particularly light foot may yield slightly more.

It's a similar story with the petrols. The entry-level non-turbocharged 1.2-litre three cylinder petrol model is rated at 57.6mpg and 114g/km, while the more powerful 108bhp and 129bhp turbocharged models hit 64.2mpg and 58.9mpg respectively. 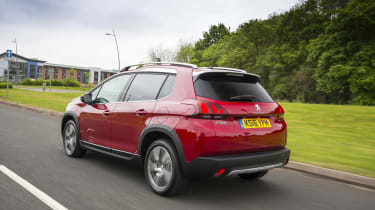 The lower powered 108bhp version is also available with a 6-speed automatic giving it a figure of 58.9mpg as well. In a recent week of mainly motorway trips, the trip computer showed figures in the low 50s for the PureTech 130 in GT Line trim, so the potential for decent real-world economy is always there.

Otherwise, the 2008 is designed directly to appeal to those after a low-cost ownership proposition. PCP and hire lease finance deals are always ripe for the taking, while servicing and insurance costs are also extremely low.