The signs are very, very good for the next GTI 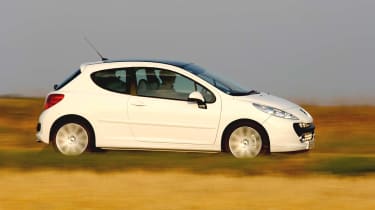 The plot unfolds. Peugeot launches 207, an entirely conventional modern supermini with struts at the front, a torsion beam at the back and a bit of a weight and girth problem. That’s normal: see Punto, Corsa, Clio, Yaris for identical stories.

But Peugeot, as we know, has lost the plot as far as its hot hatches are concerned. It used to vie with Renault as top hot-hatch maker, but while its rival never lost faith, Peugeot went soft-focus and pretended the market didn’t exist any more. The 206 GTI 180 was not a car created with conviction.

So, as far as evo readers are concerned, Peugeot is now in the last-chance saloon. How it escapes will be evident next spring, when the 207 GTI appears with its 175bhp turbo engine (shared with the new Mini Cooper S) and the promise of genuinely engaging chassis dynamics, but for the moment there’s the 207 GT Turbo.

It might look like any 207 GT to you (with no identifying badging it’s visually identical to the 207 GT HDI 110 diesel), but behind that rictus front grille sits the lower-power, 150bhp version of the new, joint-venture, Peugeot-BMW turbo engine. The differences lie in camshaft timing and electronic calibration, which together result in a torque spread of 177lb ft all the way from 1400 to 3500rpm. There’s 116lb ft at just 1000rpm, 153lb ft at 5000.

That it’s a direct-injection unit with a 10.5:1 compression ratio helps its off-boost energy, and cleaning up the pressure pulses to the turbo helps reduce lag. Pulses from cylinders one and four are fed through a separate channel from those emanating from two and three, so they don’t interfere with each other. It’s the four-into-two part of a typical performance exhaust manifold.

And the result? One smooth, very torquey and surprisingly crisp engine, rather keener to launch from low speeds than its more powerful sibling (judging by our recent drive in the Cooper S). There’s a bit of a boom from 5600rpm, worse on one 207 GT than on the second I tried, but otherwise it’s an enthusiastic, if hardly sonorous engine with a great spread of energy. A six-speed box helps make the best of it, 62mph arriving in 8.1sec from a standstill, and frankly it’s a more pleasing engine than the cane-it-to-death, rev-hungry Clio 197’s.

Fine. Handling, interactivity, fluidity, talent? This is where it could all go wrong. I’m delighted, relieved and slightly surprised to report that it’s terrific. The electric power steering is precise, believable and as natural-feeling as these systems can ever be, the whole car feels all-of-a-piece, and you can feel the tail loading up as you spear into a bend. Back off now and it loads up more, making the Peugeot properly pointable but without ever threatening a spin. The ESP, non-switchable but lenient and subtle in its intervention, is your ally here, and no doubt helps the 207’s dogged resistance to understeer. In short, it feels much like its Fiesta ST rival but with a smoother, torquier engine.

A stiffer torsion beam than on the GT HDI 110 helps with this pointability, while firmer rear bushes in the front wishbones and revised damper settings help towards far and away the best-handling, best-steering 207 to date. It also rides better than the too-stiff GT HDI; it’s firm and almost lean-free, but seldom jars. Shame about the gearchange, though, which is loose and springy.

It’s a proper fast hatch, then. So it’s strange that Peugeot downplays the identity of what is really the new 205 XS. Still, the GTI-shaped future is looking good. About time, too.