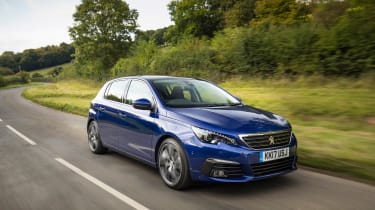 Peugeot has announced UK pricing and specification for its new 308 model, which will start at £14,495 and end at £24,045. Looking significantly sharper than the car it replaces, it’s set to continue the French company’s minor reinvention, kicked off by the 208’s 2012 debut.

Available to order now, the VW Golf rival will reach first UK customers on 4 January 2014. At launch, there will be four spec levels: from the most basic Access, through middling Active and Allure to the top-of-the-range Feline. The 308 R and GTI models, which evo readers will be most interested in, are also likely to follow.

The new 308 is shorter and lower than its forebear, and uses a new ‘EMP2’ platform that will underpin new Peugeot and Citroen hatchbacks and saloons. Peugeot’s new naming system means a modern-day 309 has sadly been averted. It means more interior and boot space (despite the shorter length) while it also contributes to an average weight cut of 140kg compared to the current 308. Sharper handling is also promised, with particular focus on the suspension and steering and. According to Peugeot, the platform has led to 116 patent applications. The new 308 is designed to signal a move upmarket for Peugeot. The dashboard’s use of a 9.7in touchscreen means far less buttons are needed, creating an uncluttered interior, while the small steering wheel of the 208 supermini makes an appearance. Whether it still impairs the driver’s vision of the dials remains to be seen…

There a four engines to choose from, including the hyper-economical 1.6-litre HDI 120, with CO2 figures as low as 82g/km – less than a hybrid Toyota Prius. There’s also the usual mix of HDI diesels and THP petrol engines, with the quickest models getting the 156bhp 1.6-litre petrol engine .

The revitalisation of the GTI badge courtesy of the sharp new 208 should stand the chance of a proper 308 GTI in good stead, with a tuned up 1.6-litre turbo petrol engine – from the RCZ – likely to power its front wheels.