Group B racing rules paved the way for one of the most spectacular 1980s supercars, Porsche's 959 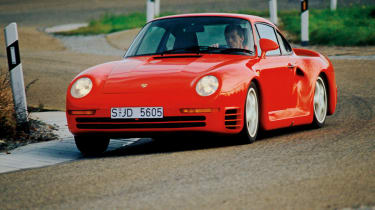 Gruppe B. That was the name the car that would eventually be known as the 959 wore when it was first presented to the world at the Frankfurt motor show in 1983. A technical tour de force, the car was the brainchild of Porsche’s chief engineer, Helmuth Bott, who had proposed a new model – one faster and more powerful than the 911 – that would be developed for and compete in Group B racing. Of course, the fabulous thing about the Group B rules was that they stipulated 200 road-legal examples of a car had to be made for it to be eligible for competition…

While there were glimpses of the contemporary 911 in the Gruppe B – the wheelbase, the roofline, the windows and doors, much of the interior – in truth the new model had little in common with Porsche’s perennial sports car. Even the familiar-looking panels were in different, lighter materials – the doors were aluminium rather than steel, as was the front boot lid, while the rest of the bodywork was Kevlar. Flared arches, linked on each side of the car by wide sill extensions, housed the Gruppe B’s wider track, while a more aerodynamic nose helped reduce drag and an adjustable rear wing controlled downforce.

Beneath that rear wing sat a development of the turbocharged flat-six used in Porsche’s 935/78 Le Mans racer, aka Moby Dick. Featuring water-cooled cylinder heads and an air-cooled block, here the unit was reduced to 2.85 litres in capacity and, to ensure a smooth, lag-free power delivery, equipped with a pair of sequential turbos. The smaller capacity allowed the new car to fit in the 4-litre Group B class when its engine size was multiplied by the 1.4 equivalency factor for turbocharged cars, while titanium conrods, forged alloy pistons and Nikasil-lined cylinders helped the unit to produce a claimed 400bhp in competition trim.

Even more intriguing was the appearance of a technology Porsche had only previously fitted to the 911 Cabriolet concept at the Frankfurt show a year earlier: four-wheel drive. Audi’s new Quattro was already demonstrating that 4wd was essential for success in rallying, and Porsche believed it would also help the Gruppe B get its power down – especially in the wet – and remain balanced in the corners on track. Based on data received from sensors in each wheel, the computer-controlled Porsche-Steuer Kupplung (or Porsche Control Clutch) system could split torque 50:50 front:rear in slippery conditions, or at the other extreme send up to 80 per cent to the rear wheels under hard acceleration.

Even the Gruppe B’s suspension was different to the 911’s, the latter’s MacPherson-strut front and semi-trailing-arm rear set-up replaced by double wishbones at each corner with two electronically adjustable dampers per wheel – one to control the firmness of the ride, the other to adjust the amount of ground clearance (the driver could choose from three settings for each, although the firmest and lowest settings would be selected automatically at speed). The 17in wheels were hollow-spoked magnesium alloy items fitted with Dunlop Denloc run-flat tyres and a tyre-pressure monitoring system.

That the Gruppe B would be given the green light for production was never in doubt. Even when plans for a Group B circuit racing series faltered (the Porsche and Ferrari’s 288 GTO were the only cars to be designed for it), Porsche pressed on with the car. Wearing the name 959 and Rothmans livery, a derivative appeared in the Paris-Dakar, taking a 1-2 finish in 1986, while a one-off 680bhp version, called the 961, would finish first in class and seventh overall at Le Mans the same year. But it was the road-going version, eventually launched in April 1987, for which the 959 would be remembered, not least because, now with 443bhp, it could hit a verified 197mph, making it the world’s fastest production car.

Even with a price tag of £150,000 – three times that of the 911 Turbo – Porsche had no trouble selling them. Over the next 14 months just shy of 300 959s were built, far exceeding the original homologation requirement and despite the fact that the company lost money on every one. Porsche obviously thought it was worth it.