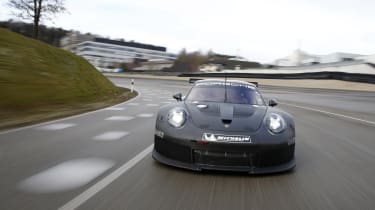 Porsche has unveiled the successor to its 911 RSR race car. Currently in development and testing at Weissach, the new car will make its racing debut in 2017.

The car has just completed its first test runs at Weissach and will now begin testing at various race tracks around the globe. January 2017 will see the as of yet unnamed race car compete at the Daytona 24hrs.

The car will be competing in the GTE and GTLM classes, replacing the current and hugely succesful 911 RSR. Details on the new race car are predictably scarce, but what's clear from the images Porsche has released is that the car appears even wider, even more aggressive and an even bigger step away from a 911 road car.

The 911 RSR itself is a pretty big departure. It weighs just 1245 kg, uses a longer wheelbase, different intakes and a four-litre water cooled 467bhp flat-six. The gearbox is a sequential six-speed Porsche GT racing setup.

For this, the RSR replacement, Porsche appears to have moved closer to the iconic and altogether much more unhinged GT1. We will be updating this story as and when we have more details.