See the Porsche 919 Hybrid drive through the streets of London

Mark Webber drives the Porsche 919 Hybrid through the city 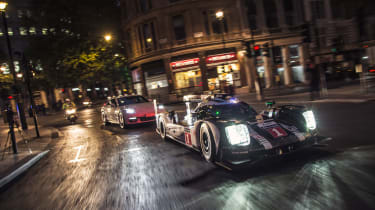 Completing two runs of a four-mile course, the reigning FIA WEC Champion driver set off from Park Lane, along Piccadilly and around Piccadilly Circus, through Trafalgar Square, on to Charing Cross, along the Embankment, took in a quick lap of Parliament Square before crossing Westminster Bridge, rounding Waterloo and back again. All before 7am and without closing any of the capital’s roads.

Why, you may ask, go to such lengths when they UK round of the FIA World Championship isn’t until April? Because following closely behind was a new Panamera S E-Hybrid, the latest edition to the new Panamera line up that announced a couple of weeks ago. It’s all about the technology transfer from race car to road car, you see. 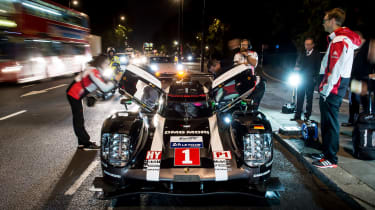 This is not the first time a race car has run on the streets of the London. In 2004 the F1 circus came to the capital when Berne Eccelstone put his perennial squeeze on Silverstone, by toadying up to then Mayor of London Ken Livingstone to suggest a London Grand Prix could be possible. The result was an evening demo of F1 cars driving along Regent Street and down The Mall in a pre-arranged publicity stunt. In 2010, Red Bull carried out a pit stop in Parliament Square with then current driver Mark Webber…

But there was something quite cool about Porsche’s run this morning. Notification of the event taking place was given at 10pm on Monday night. At 3am the 919 was in place on Park Lane and fired up and put through a its warm up. At 5am the eight Police outriders that would cut a path through London for Webber to follow were briefed and at just after 6am the 919 was off into the morning darkness.

It may have been brief. It may not have been at over 200mph, but watching an LMP1 car sweep through Trafalgar Square with a smattering of bemused commuters, taxi drivers and white van drivers was way cooler than watching F1’s over produced event a decade earlier. 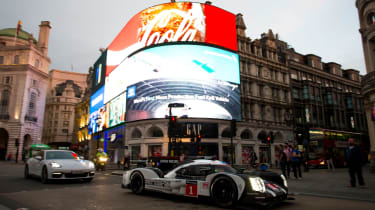 Three races remains of the 2016 FIA World Endurance Championship. The Six Hours of Fuji us held on the 16 October, before heading to Shanghai on 6 November and the season finale in Brazil on 19 November.