It's official: Porsche is coming to Gran Turismo Sport 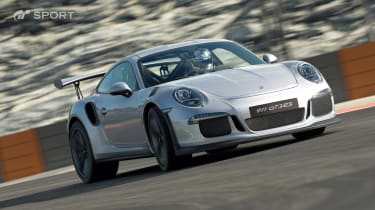 We've waited two decades to see Porsche in Gran Turismo, and with the upcoming Gran Turismo Sport title it will finally happen.

So far, we know of the existence of just one Porsche set to make its appearance in the game: the 991 GT3 RS. The initial batch of images show the car both on track and beautifully rendered in the game's photo mode, also giving us a glimpse of the interior.

So why has it taken so long to get the official Porsche license? The answer is Electronic Arts, which held an exclusive license for the cars until 2016. Some non-EA titles did include the cars - one or two Forza titles in particular - but generally, gamers had to opt for titles like Need For Speed to get their Porsche fix. 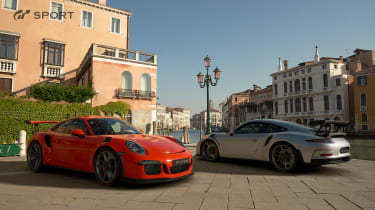 Or, in the case of Gran Turismo, settle for RUF versions, which slipped through the net by virtue of RUF being a manufacturer in its own right. GT Sport is expected to include around 140 cars initially - fewer than both GT5 and GT6's "premium" car count, though this should rise over time with downloadable content.

There is still no set release date for Gran Turismo Sport, which will only be available on the PlayStation 4, but it's currently pencilled in for "late 2017" - so hopefully it will drop before Christmas.

> The future of racing games? Virtual reality and motion rigs?