We say a fond farewell to one of the most successful WEC cars of all time, the Porsche 919 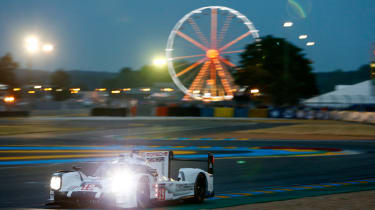 Porsche wrapped-up it’s third consecutive World Endurance Championship title with a round to spare at China’s Shanghai International Circuit last weekend. The Toyota TS050 of Anthony Davidson, Kazuki Nakajima and Sebastien Buemi took victory in the six-hour event, but second place for the Porsche 919 of Brendon Hartley, Earl Bamber and Timo Bernhard was enough to secure them the drivers’ crown and Porsche the LMP1 manufacturers’ silverware.

This remarkable success effectively marks the swansong for the 919 in the WEC, with Porsche pulling out of the series following the last race of the season in Bahrain on 18 November. In the four years since rejoining endurance racing’s top level in 2014, Porsche has scooped a trio of drivers’ and constructers’ championships, plus three Le Mans 24-hour wins, beating both the previously dominant Audi squad, which abandoned the series at the end of 2016, and Toyota in the process. So it seems like a good time to take a look back at what made the Porsche 919 such a dominant force.

The car made an low-key debut at the 2014 Silverstone Six Hours, with the lead car of Formula One refugee Mark Webber and team mates Brendon Hartley and Timo Bernhard taking the final podium spot, albeit a couple of laps behind the winning Toyota, while the sister car of Marc Lieb, Neel Jani and Romain Dumas was forced out with a mechanical fault. In fact, technical issues were a common theme throughout that first campaign; not surprising when you consider the technical complexity of the 919.

At it’s heart was a bespoke 500bhp turbocharged 2.0-litre V4 petrol engine – at this time Toyota used a naturally aspirated 3.7-litre V8, while Audi favoured it’s tried and tested 4.0-litre V6 turbodiesel. Like its rivals in the LMP1-H class, Porsche augmented the internal combustion engine with an electric motor; in this case a 400bhp unit mounted to the front axle. This was powered by a Lithium Ion battery pack that was charged both kinetically during braking and by an electric motor linked to the turbocharger. Like its Audi rival, the Porsche used the electric motors to deliver four-wheel drive traction when deploying both petrol and electric energy.

At the time, the 919 was the only hybrid LMP1 car to run the two forms of energy recovery. However, due to fuel flow regulations, Porsche elected to run the car in 6 mega joule (mj) guise, rather than the highest 8mj category, meaning it lacked a little in outright performance. Even so, the car finally notched up its maiden win at the season-ending race at Interlagos in Brazil – although the victory by Marc Lieb, Neel Jani and Romain Dumas isn’t quite as well remembered as the huge crash endured by team mate Mark Webber after he clipped a slower GT through the flat out Turn 14 kink before the main straight.

For 2015 the 919 looked outwardly similar to the previous year’s machine, but under the skin it was around 85 percent new. Crucially it was 30kg lighter, meaning it now met the minimum weight target, plus is was now able to run in the more powerful 8mj class. After a slow start – Audi won the first two rounds – the Porsche got into its stride, taking a clean sweep of the remaining six races. At the end of the year, Porsche was as crowned manufacturer’s champions and Webber, Hartley and Bernhard secured the driver’s crown.

Yet perhaps the highlight of the year was the Le Mans win, which was Porsche’s seventeenth victory at the round-the-clock event and it’s first since 1998. More remarkably it was the team’s third car that took the spoils, with a driver line-up comprising Porsche’s GT stars Nick Tandy and Earl Bamber, plus Formula One stalwart Nico Hulkenberg, who had been given special permission to race by his Force India F1 squad.

The following two seasons saw the 919 continue in much the same vein, although the fallout from the Dieselgate road car scandal that engulfed parent firm VW meant the factory entry was slimmed from three cars to two. In 2016, the 919 took another six wins, with Audi and Toyota taking victories in two and one race respectively.

Once again, Porsche notched up victory at Le Mans – although it was only by the skin of its teeth when one of the Toyota’s dropped out of the lead with a technical fault three minutes from the end of the race. At the end of the year, Lieb, Jani and Dumas were named drivers’ champions, mainly through consistent points finishes – the trio only won two races while Webber, Hartley and Bernard took four wins. 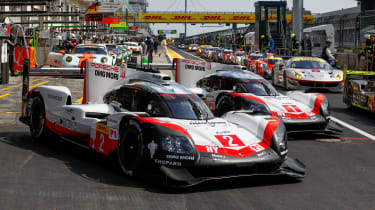 A reshuffled driver line-up was the big news in 2017, with Webber, Dumas and Lieb all stepping down from front line duties. That meant that Hartley and Bernhard were joined by Earl Bamber in the number 2 car, while in the sister car Jani was joined by Audi exile Andre Lotterer and 2015 Le Mans winner Nick Tandy.

With Audi gone from the series it was a straight fight between Porsche and Toyota. Toyota started strong with two early victories before Porsche hit a purple patch and cantered to four wins on the trot, all scored by Hartley, Bamber and Bernhard. Toyota hit back with victories in the two most recent races, but it was too little too late and Porsche were able to sign off from the World Endurance Championship on high with its three world titles. Crucially, it also raised its tally of Le Mans wins to an unprecedented 19, which is unlikely to be bettered.