Porsche Museum restores one of the first 911s ever built

One of the few original cars built under the 901 nomenclature, Porsche has fully-restored one of its first 911 customer cars 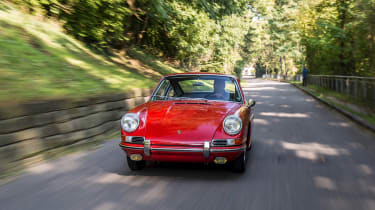 Porsche has put one of the earliest 911s on show at the Porsche Museum in Stuttgart after an exhaustive ground-up restoration. The Signal Red 1964 ‘901’ coupe is distinct from its later 911 siblings thanks to that 901 nomenclature, Porsche’s initial name for the 356 replacement until a trademark issue forced Porsche to instead call the now iconic coupe the 911.

Purchased by Porsche in 2014, this specific 901-build car is the only one Porsche has in its possession, representing an uncharacteristic gap in the marque’s past. Found lurking in a rural barn in Germany, ‘Number 57’ as it was nicknamed by its restoration crew, was in a very poor state of repair upon its discovery.

Having spent the best part of three years under reconstruction, Porsche’s restoration team had to tear the car right back to its raw steel chassis, spending over 12 months remanufacturing the basic shell which had been eaten away by 50 years of rust and dry rot. Large structural sections of the body were found to be completely unusable. Despite its condition, upon closer inspection by the team the body was found to be completely original, with around 50 per cent of the original bodywork able to be preserved. 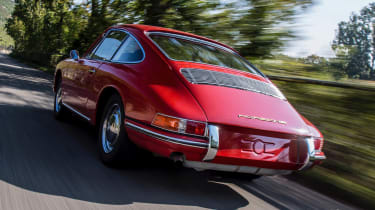 Porsche Classic took on the task of reviving the engine, which aside from seized pistons, proved to be a relatively straightforward operation. The right hand camshaft was reconditioned and re-installed, meanwhile the left hand unit needed to be replaced with a new part.

Thanks to the remanufacturing capability of Porsche Classic, many powertrain, chassis and aesthetic components could be reproduced to exact period specification, including a variety of interior finishes. The cabin’s rooflining was of particular interest, as the original square perforation on the lining was only in production for a very short period of time. Despite this very specific component, Porsche was able to source the original stamping tool to re-create the patterned roof, giving you some idea of the level of detail Porsche went to in order to complete the restoration. 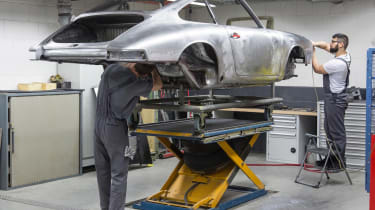 This same level of attention to detail was laboured on the entire restoration, with elements like the screws holding in the front indicator housings needing to be custom fabricated to period specification. Now on display at the Porsche Museum, 901 ‘Number 57’ is an exceptionally important part of the Porsche 911 story, now finally restored to its former glory.