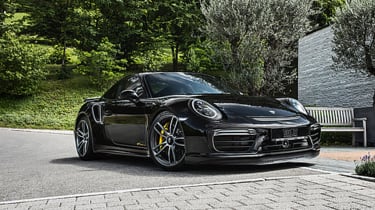 German tuning company Techart has revealed details of a new 911 Turbo S-based GTsport to celebrate the imminent end of 991.2 Porsche 911 production. Upgrades consist of mechanical, aesthetic and interior modifications, all applied with more restraint than can usually be attributed to the German tuning company.

Starting under the skin, the GTsport builds on the standard 911 Turbo S twin-turbo 3.8-litre flat-six with Techart’s T1.1 upgrade, raising power to 631bhp (up 59bhp over standard) through a subtle remap of the ECU. Torque is up to 649lb ft, a chunky 96lb ft more than standard. Techart has also fiddled with the exhaust system, adding its own active valve exhaust system to the package.

> Click here for our review of the Porsche 911 Turbo S

The power upgrades liberate even more dramatic acceleration figures, reaching 62mph in just 2.7 seconds, 0.2 faster than claimed by the factory. The top speed is now 209mph, up 4mph.

Inside the changes are equally undramatic, with a few splashes of contrasting colour, but overall little else has changed. Only 30 units will be sold in kit form for both brand new, and existing models. It’ll cost from about £26k at current exchange rates, on top of the standard Porsche 911 Turbo S’ £147,540 list price. Add in a few further options, and you’ll soon be looking at a £180k Porsche 911, a large sum of money, regardless of its quite spectacular capability.