Porsche paradise at Amelia Island – 964 RS, 918 Spyder and more up for auction 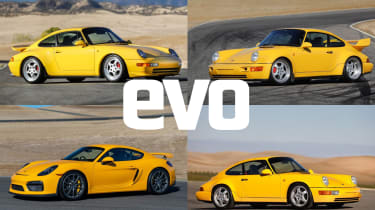 This year’s Gooding & Company auction at Amelia Island will be one for Porschephiles to keep an eye on, with examples of some of the marque’s most desirable models coming up for sale.

Among them are a veritable who’s who of 997s, a couple of recent evo Car of the Year winners, a desirable duo of 993s, a perfect pair of 964s, and of course the brand’s most recent hypercar, the 918 Spyder.

> Click here for our review of the new Porsche 911

The majority of the current listings at the auction – a ten-car consignment to be precise – is being sold by WhatsApp founder Jan Koum. The most interesting are a bright yellow trio of 911s: a 1992 Porsche 964 Carrera RS, a 1993 964 Carrera RS 3.8, and from a couple of years down the line, a matching 993 Carrera RS 3.8.

The initial photos show them appropriately, and tantalisingly, placed on a circuit. Each car is incredibly rare, so it’s debatable whether any will ever return to the track, but Koum seems hopeful. ‘If I had unlimited time and unlimited garage space, I would never sell any of them,’ he said of his decision to sell a chunk of his collection, ‘but nevertheless I’ll be very happy to see the next owner driving these special cars on the road or on the racetrack.’

Koum’s 991-generation 911 R is even less well travelled. Still wearing its window stickers and protective wrapping, it’s never been driven. From a value point of view it’s an intriguing prospect, though unless there’s someone out there who can’t bear to drive anything but a brand-new vehicle, it’s likely this car will go straight into someone else’s basement too. Faring little better, the 918 Spyder – with a Weissach pack, of course – has only 20 miles showing on the odometer.

Full details of all the cars, including reserve prices and estimates, are yet to be confirmed - and several more lots are likely to join the party over the coming months.