Porsche Motorsport has revealed its new 911 RSR race car, designed to compete in the WEC and IMSA racing series’ from September this year. Although the model is still (loosely) based on the previous-generation 911, Porsche insists that the new RSR is 95 per cent new, with a larger flat-six engine, refined aerodynamics and new racing tech underpinning the RSR’s development.

The changes start at the rear (or is that the middle?) where Porsche has fitted a new 4194cc flat-six engine, the largest ever fitted to a factory Porsche 911 road or race car. Power is pegged, depending on its restrictors, at around 508bhp, but Porsche is promising the new power unit will be more flexible than before, with a wider and flatter powerband producing more power, more of the time.

The exhaust system is totally new, with the outlets now exiting on either side of the body, just ahead of the rear wheels. Aside from looking cool, the new exhaust outlets have allowed engineers to further optimise the rear diffuser, as part of a wider aerodynamic overhaul. The eagle-eyed among you might also have noticed the significantly bigger side air intakes, as well as new body panels all round, hiding a revised suspension layout. Porsche says, in fact, that the new RSR shares only its headlights, brakes, clutch, driver’s seat and some basic suspension components with the previous 911 RSR.

Alongside the RSR’s performance updates, the new car has also taken on driver feedback, with improvements to driver visibility, as well as passive and active safety systems. One such feature is an improvement to the collision warning system that notifies the driver when a faster vehicle is approaching in the vehicle's blind spot.

The new Porsche 911 RSR will debut in September this year, when it will defend its GTE-Pro title in the FIA WEC opener at Silverstone, while ISMA series and customer teams will debut the car later in 2020. 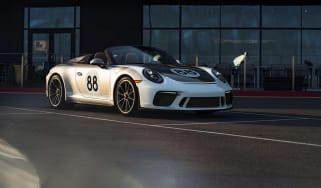