Low-30s economy should suit most owners, even if it’s not a vast improvement on that of the old six-cylinder cars in the real world 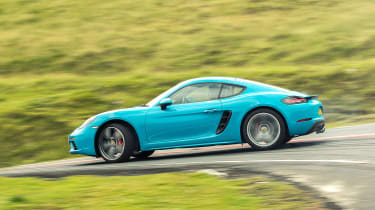 The main purpose of Porsche downsizing the previous Cayman’s flat-six engines to turbo fours was to reduce emissions in the wake of tightening CO2 regulations. A move to WLTP testing since the 718 was introduced means it’s more difficult now to compare figures with the old sixes, but a figure of up to 33.2mpg for a PDK Cayman and 32.8mpg for the manual should be enough for most buyers.

The Cayman S is barely less frugal despite its extra capacity, Porsche quoting 31mpg for the PDK and 29.1mpg for the manual. Emissions, meanwhile, are still calculated on the old NEDC testing cycle, and range from a low of 180g/km for a PDK Cayman, to 210g/km for a manual Cayman S.

With those changes to WLTP regulations, the numbers are also more realistic than before, and in normal, mixed driving, a figure in the low 30s shouldn’t be too difficult to achieve in any turbocharged Cayman – though it also shows how much weight and size play a part, as an Alpine A110 with similar performance is capable of more than 40mpg in similar driving. 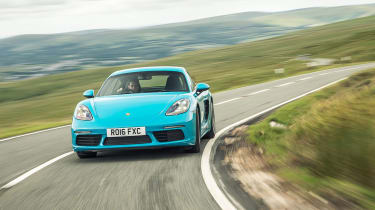 That said, in context of its other rivals, the 718’s overall consumption is still pretty good. Less so in context of its predecessor, which could also register numbers in the low 30s in mixed driving, but that’s one of the more awkward truths of the latest wave of downsized engines…

Porsche servicing can be on the expensive side, though a 36-month, unlimited mileage warranty should offer peace of mind.

Tyres will vary from model to model. You’re looking at around £350 for a pair of Goodyear F1 Asymmetric 2s or £380 for equivalent Michelin Pilot Sport 4 Ss for the 235/35 ZR20 fronts, and £390 for the rear Goodyears and £460 for the rear Michelins in 265/35 ZR20. Those sizes are representative of a Cayman T, and all prices are fitted, delivered by Blackcircles.