Is it just a Carrera S with some Porsche 919 Hybrid inspired livery? 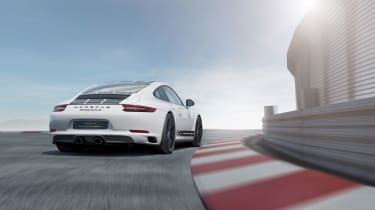 Porsche has won Le Mans more times than any other manufacture. So, even though the 2016 24 hours of Le Mans hasn’t even started yet and we have no idea who the winner will be, it still seems appropriate for Porsche celebrate.

Porsche has released details about its new special edition that honours the company’s success in endurance racing, and not just Le Mans. Called the 911 Carrera S Endurance Racing Edition, it not only celebrates Porsche’s success with its high-powered prototypes but also the 911’s exceptional racing history.

Don’t expect a special edition in the mold of the 997 Sport Classic, or even the 991 50th Anniversary Edition. The Endurance Racing Edition is predominantly a Carrera S with some desirable options and some stickers. It comes in either white or Guards Red with black decals, or black with grey decals. Porsche Team’s World Endurance Championship 919 Hybrid cars have inspired the colours and livery.

Inside there’s carbon interior trim and a red band at the top of the steering wheel to further emphasize its links to motorsport. Less like a race car are the door sills that light up the words ‘911 Carrera S Endurance Racing Edition’, red seat belts, floor mats with red leather edging and ‘Porsche Intelligent Performance’ embossed on the centre armrest.

Underneath the Endurance Racing Edition’s spec reads like the ideal non-GT 991 Porsche. It’s based on the Carrera S, so its twin turbocharged 3litre flat-six develops 414bhp and 369lb ft of torque. Then, as standard equipment, it gets the Sport Chrono package, the sports exhaust, Porsche Dynamic Chassis Control (PDCC) that includes PASM Sports Chassis lowering the body by 20mm and rear axle steering. The Endurance Racing Edition can be had as a manual or with Porsche’s PDK gearbox.

The Endurance Racing Edition is manufactured by the Porsche Exclusive department. A facility that bought us the Flachbau 911 Turbo, the Supercar Champion edition of the 964 Turbo S and a wide bodied version of the Carrera S Speedster.