Porsche 918 Spyder to be made 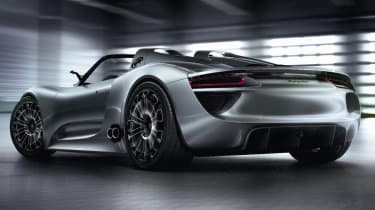 The show-stopping Porsche 918 Spyder hybrid supercar will be going into production.  Porsche has a habit of turning concept cars into production reality – note the Boxster and Carrera GT as recent examples – and it hasn’t disappointed with the 918 Spyder, which has been given the green light for development. The car was a real surprise to everyone and stole the show at the 2010 Geneva motor show, its groundbreaking technology wrapped up in such a well resolved and pretty shape. The electric/petrol hybrid show car was speculated to replace the extraordinary Carrera GT, packing a combination of 500bhp V8 power and 218bhp electric punch, with the latter powering the front axle, effectively making the 918 all-wheel drive. Power is transferred to the wheels via a seven-speed PDK twin-clutch gearbox. The new technology endows the Spyder with spectacular performance and Green Party pleasing efficiency; claimed figures of 94mpg and 70g/km of CO2 emissions mix with a target lap of the Nurburgring Nordschleife in less than 7min 30 sec, a 198mph top speed and a 0-62mph time of 3.2sec. That Ring lap would be quicker than the Porsche Carrera GT’s…

We fire the Porsche Carrera GT around the track            Michael Macht, President and Chairman of the Board of Management of Porsche AG, said ‘production of the 918 Spyder in a limited series proves that we are taking the right approach with Porsche Intelligent Performance featuring the combination of supreme performance and efficient drivetrain concepts.’ Expect a production version of the 918 Spyder by 2013 at the earliest, and don’t expect an awful lot of of change from half a million pounds. But do expect the guys over in Weissach to develop something pretty memorable.

Chris Harris's video on the 918 part one