Porsche has pulled the wraps off the latest incarnation of the 911 - the 408bhp GTS. 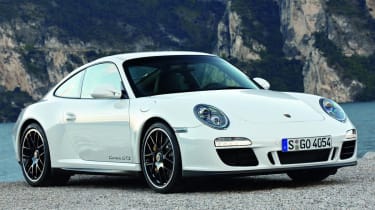 Porsche has added a new trim level to the 911 range. The 911 GTS will be launched at the Paris Motorshow and uses an uprated version of the Carrera S 3.8-litre flat six. It’s the same 402bhp unit that saw service in the limited edition Sport Classic and can also be specified on the standard Carrera S by speccing the £8241 Powerkit.

Peak power rises by 23bhp thanks to a sports exhaust and carbon fibre airbox, and peak torque of 310lb ft arrives at 4200 rpm, 200 rpm earlier than the standard S. Porsche claims a subsequent drop in the 0-62mph dash of 0.1sec to 4.2sec (for the PDK version with optional Sports Chrono Package Plus - a six-speed manual is also an option). Top speed increases by 2mph to 190mph, while fuel economy is unchanged.

Cosmetic changes over the S are perhaps more tangible, with the GTS adopting the wider rear track of 4wd 911s and wearing a tasty set of gloss black 19-inch RS Spyder alloys. Other features include a front apron edged in black, black side skirts and quad black tailpipes, and plenty of colour-coded GTS badging. The interior remains largely standard but the front seats, new three-spoke steering wheel, gear lever and handbrake are all covered in alcantara.

evo's video of the Porsche 911 Carrera GTS is here