The Porsche 911 steps up a gear with its new 991 generation, with more power, lower emissions and a seven-speed manual gearbox among the changes 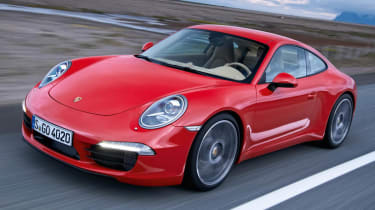 Porsche has officially revealed its all-new 911. Don’t be deceived by the overly familiar styling, this is a completely new iteration of the famous rear-engined sports car and represents its most dramatic evolution in over a decade.

It does look different, though, thanks to a 100mm longer wheelbase, shorter overhangs, a lower roofline and wider front track. As a result, the new 911 has a more purposeful stance while dynamics should be sharpened up by the car’s new footprint.

Also aiding the driving experience are kerb weight savings of up to 45kg per model, an all-new aluminium-steel composite body accountable for a lot of that. The base 911 Carrera has downsized, getting a new 3.4-litre flat-six engine with 345bhp, and with Porsche’s Sport Chrono Pack fitted, it can dispatch 0-62mph as quickly as 4.4sec. The 911 Carrera S boasts a 395bhp 3.8-litre flat-six and can hit 62mph in 4.1sec. As always, the engine sits behind the rear axle to give Porsche’s sports car its famous layout. More dynamic tweaks come in the form of a new rear axle, electro mechanical power steering and PDCC (Porsche Dynamic Chassis Control), a new system designed to reduce body roll and hence up cornering speeds. The new steering system is one of many changes described as ‘Porsche Intelligent Performance’, a wave of measures to cut energy consumption and make the 911 a cleaner, more efficient car. There’s also a start/stop system, energy recuperation, the world’s first seven-speed manual gearbox, and, if you decide to go for the PDK twin-clutch automatic gearbox instead, a coasting function that decouples the engine during cruising. It all sounds impressive, though whether an electrically assisted steering system can deliver the feel a 911 ‘wheel normally delivers remains to be seen. Hot hatch-like claimed figures of 34.4mpg/194g/km of CO2 (Carrera) and 32.4mpg/205g/km (Carrera S) are hard to ignore, though. The all-new Porsche 911 (which we’ll come to know as the 991) gets its covers pulled off next month at the 2011 Frankfurt motor show, and arrives in UK showrooms in December. The Carrera kicks off at £71,449 while Carrera S prices start from £81,242. Do you like the new 911? Or would you prefer Porsche to go more radical? Let us know on the evo Magazine Facebook page, Twitter feed or on the evo.co.uk forum

See the new Porsche 911 in action on video