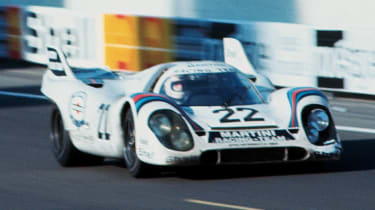 Porsche has teased its return to the Le Mans 24 hours with a video paying homage to the 917 racecar. Highlights include lots of scintillating period footage and a walkthrough of all the previous records Porsche demolished in 1971, including the world’s lightest chassis, fastest lap at Le Mans, fastest average speed throughout the race and furthest distance travelled during the entire 24 hours, figures which, of course, led to victory. It then declares ‘Mission 2014. Our return’.

A pair of Porsche 911 RSRs will fight it out in the lower classes of Le Mans this year, while 2014 marks an LMP1 entry to fight for overall race victory for the first time in 15 years. A new LMP1 prototype racer will be first wheeled out in the middle of 2013.