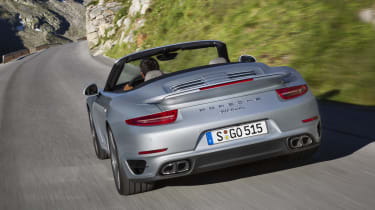 The 2013 Porsche 911 Turbo Cabriolet has been revealed, and there’s a Turbo S version too. Essentially the 991-generation 911 Turbo unveiled at the Frankfurt motor show with a folding soft top replacing its closed shell, it uses the same 3.8-litre flat-six engine with variable geometry twin turbochargers.

It produces 513bhp in standard trim, or 552bhp as the full-fat, Ferrari-baiting Turbo S. The result is a 3.5sec 0-62 time for the former, the latter completing it in 3.2sec on its way to a 197mph top speec. Though going by our previous timing runs in 911 Turbos, these could be quite cautious claims, with a sub-3sec 0-60 run in good conditions entirely plausible. The combination of four-wheel-drive traction, a standard PDK seven-speed paddleshift gearbox and all that power is likely to be a formidable one…

The PTM all-wheel-drive system is upgraded from the previous Turbo, and is now faster reacting and able to send more power to the front wheels, boosting the 911’s mechanical grip. There’s also rear-wheel steering and active aerodynamics, the rear spoiler and a pneumatically extending front splitter adjusting to create up to 132kg of downforce at 186mph. Like the 911 Turbo coupe, the drop-top version is also wider than a standard Carrera or Carrera 4, the rear aches stretching out an extra 28mm.

Of course, the big change the Cabriolet possesses over the coupe is with its roof. Described as a ‘bow top with magnesium frame’, it is designed to replicate the roofline of the coupe when closed, optimising the aerodynamics as well as roof-up styling. It opens and closes in 13 seconds at up to 31mph.

The new Porsche 911 Turbo Cabriolet and 911 Turbo S Cabriolet debut at November’s LA motor show, with sales following in December. The Turbo will cost from £126,766, the Turbo S starting at £149,511; that means an average rise of around £8500 over their hard-top siblings, and a price point for the Turbo S that’s nearly £50,000 cheaper than the Ferrari 458 Spider and McLaren 12C Spider its performance will closely match.