New turbocharged GTS can hit 62mph in as little as 3.6sec, PASM and wide body are standard 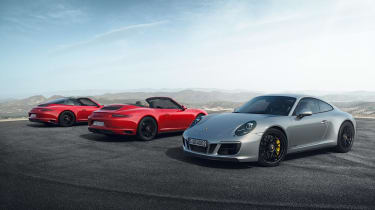 The world's media might be focusing on the Detroit auto show, but no-show Porsche has done its best to turn attention towards Stuttgart by launching the new 911 GTS.

With previous GTS models often being highlights in their respective ranges, there are high hopes for the latest car, which like other non-GT 911s utilises a turbocharged, rather than naturally-aspirated powerplant, while it's available in both rear- and all-wheel drive formats and as either coupe or convertible.

Torque is the main gain of the new turbocharged engine, with not just a greater output than before but also the ability to deliver that output at day-to-day speeds. The 406lb ft peak is now developed in a wide spread from 2150rpm to 5000rpm, while that power is sent to either the rear wheels, in Carrera GTS form, or all four in the Carrera 4 GTS and Targa 4 GTS. 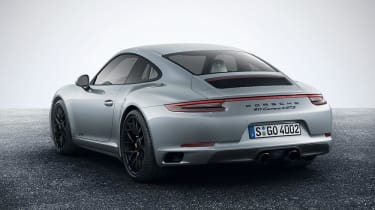 Other GTS styling cues include a new Sport Design front end with a lower spoiler, while at the rear the iconic extending spoiler now extends further to reduce aerodynamic lift. Black detailing - such as can be found on the air intakes, rear trim strip, tailpipes, 20-inch alloy wheels and on the Targa's roof bar - denotes the GTS trim, as do matching badges and smoked tail lights. Sports seats, Alcantara trim and black anodised aluminium elements spruce up the cabin.

Under the skin, Porsche Active Suspension Management (PASM) adaptive suspension is standard, as are sport suspension settings, both of which combine to drop the car 20mm lower than standard 911s and 10mm lower than cars already fitted with PASM.

Sport Chrono is also standard, with dynamic engine mounts and a sports exhaust system. All the better to better to hear the turbocharged engine as you race towards a 3.6-secon 0-62mph time in the quickest new GTS, the PDK-equipped Carrera 4 GTS coupe. In manual, rear-drive form, top speed is 194mph.

Will it drive better than the old naturally-aspirated car? That remains to be seen - and we'll find out when the range hits the UK in March, with prices between £94,316 for a rear-drive, manual coupe to £108,144 for the Targa 4 GTS.