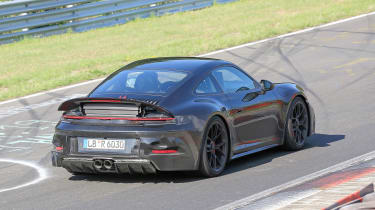 The incoming 992-generation Porsche 911 GT3 has been spotted in its less arresting Touring form looking closer than ever to production, with new wheels, and covered near-production bumpers.

Core GT3 elements such as the centre-exit exhaust outlets and slip vent at the base of the bonnet are both visible on this prototype, yet unlike many previous prototypes, does without the tall rear wing that has defined the GT3 since the original 996. It’s this element, or rather lack of, that confirms this model’s Touring designation.

Both front and rear bumpers are still covered, but look to be getting closer to production thanks to their tight shutlines and complete groundworks, specifically around the front splitter. The floating rear diffuser is somewhat more haphazard though, and its placement within its makeshift moulded shroud would lead us to suggest that the rear bumper is not quite as finished as the front. 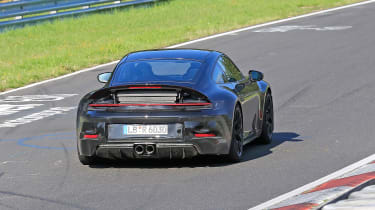 Also new for this prototype are the wheels, which are a new design. Like on the Carrera S, and the GT3 RS that came before, we expect a staggered 20/21-inch wheel size front to rear, fitted with either Michelin’s Pilot Sport Cup 2 tyre or the newly homologated Goodyear Eagle F1 SuperSport RS.

As for the rest of the Touring’s package, it will likely mimic that of the standard GT3, so that includes the fitment of a naturally aspirated 4-litre flat-six. It’s expected to easily outgun the GT4’s, with over 500bhp expected at a sky-high rev point. Both PDK dual-clutch and manual transmissions are expected to be available too, likewise Porsche’s rear-wheel steering.

As we impatiently wait for official information to start arriving from Leipzig, we can be rest assured that the GT3 recipe, which has appealed so deeply since its inception, is unlikely to deviate far from its gentle progression. With tantalizing prototypes like this one still lapping the Nürburgring, so the suspense only grows.

Powered by an Audi-derived 600bhp five-cylinder, the KTM X-Bow GTX will compete in the GT2 racing series
Visit/hyundai/201819/hyundai-i30-fastback-n-versus-the-nurburgring