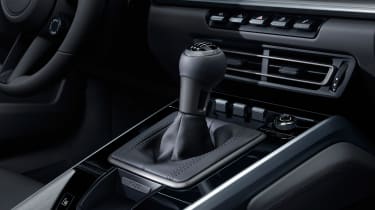 Porsche has been promising to offer the option of a manual transmission since the new 992-generation 911’s reveal late last year, and now after nearly a year, new specific details have been released. As the US is Porsche’s largest market and will receive its manual 992s before the rest of the world the details currently refer to American market models. As such, European specifications might differ, and we’ll have to wait for more specific information closer to its arrival by the middle of 2020.

In the US, the seven-speed manual transmission will be available as a no-cost option on Carrera S and 4S models in both Coupe and Cabriolet forms, but not on the entry-level Carrera models. Another caveat is that the manual transmission is only able to be specified with Porsche’s Sport Chrono package, which in the 992 911 packages dynamic engine mounts, a sports mode for the stability management system, a mode selector on the steering wheel and launch control system. Alongside these elements, Porsche has also integrated an auto rev-match function, and unlike PDK models, now utilises a mechanical limited-slip differential including Porsche’s mechanical torque vectoring.

With all of this embedded chassis hardware in place as standard, and its Carrera S-only availability, the notion of a stripped, back-to-basics 911 with a manual transmission is not what Porsche seem to be going for, until the next Carrera T arrives anyway.

Performance figures for the manual are typically less impressive than the PDK, thanks to both longer gearing and the longer shift times of a manual. Porsche remain vague on specifics at this point, suggesting a 0-60mph (note, not a 62mph time) time of around 4sec, which compares to a PDK Sport Chrono-fitted Carrera S at 3.3sec. Top speed is likely to remain at around the 190mph mark as in the PDK.

The weight figure of cars fitted with the manual transmission is also around 40kg down on the standard Carrera S at 1495kg, making it the lightest new 911 on sale, slipping 10kg below that of the standard Carrera despite the base model doing without all of the additional chassis hardware.

As mentioned above, specific UK prices and specifications will be announced closer to the on-sale date sometime before the middle of next year. 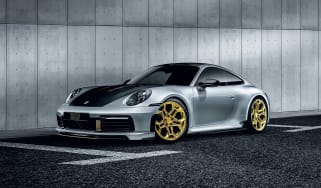