The best drop-top 911, but Coupe remains pick of GTS range 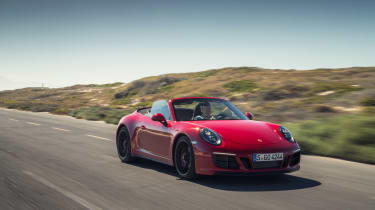 As we discovered when we drove a rear-wheel drive Porsche 911 GTS Coupe in South Africa, the new GTS is the pick of the 911 Carrera line-up. In fact, with its manual gearbox, optional bucket seats and aggressive Pirelli P Zero Corsa tyres that Miami Blue test car called to mind the fearsome 911 GT2s of days gone by.

Alas, we won’t be making that same comparison with this car, a 911 Carrera 4 GTS Cabriolet. Drop-top 911s have always played a supporting role to the fixed roof versions, but in GTS specification the Cabriolet is now better than ever.

There are five variants of the GTS at launch – Coupe, Cabriolet and Targa, with the first two available with two or four driven wheels. This particular test car was also fitted with Porsche’s twin-clutch PDK transmission. 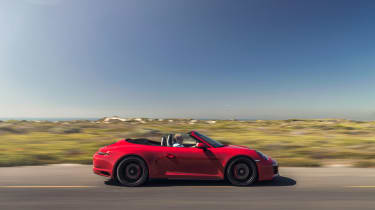 The GTS borrows the 3-litre twin turbo flat-six from the standard Carrera models, with power lifted to 444bhp. That’s a 30bhp gain over the Carrera S and a useful 20bhp advantage over the previous, normally-aspirated GTS. Peak torque is 406lb ft, available between 2150 and 5000rpm.

With the optional PDK gearbox and four-wheel drive the GTS Cabriolet hustles itself to 62mph in 4.1 seconds and on to a top speed of 191mph.

Rather then being a thorough reworking of the existing Carrera the GTS is more of an options list cherry-picking exercise. All versions, whether two- or four-wheel drive, use the wider 911 bodyshell.

Aside from the Targa with its vast glass panel, this 4 GTS Cabriolet with the PDK transmission is just about as heavy as the Carrera gets. At 1585kg it’s a full 135kg heavier than the two-wheel drive manual coupe version, which will, of course, blunt both performance and driving dynamics. 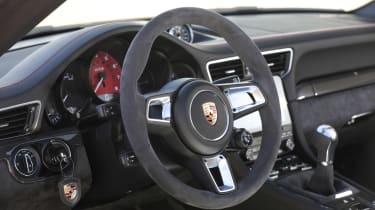 All GTS models feature Porsche Active Suspension Management with the sports chassis as standard, which means the GTS rides 20mm lower than a base-spec Carrera and 10mm lower than the Carrera S (although you can drop the S just as low by specifying the sports chassis). Sport Chrono is also standard fit, which incorporates dynamic engine mounts and a switchable sports exhaust system.

Rear-wheel steering and Porsche Dynamic Chassis Control (adaptive anti-roll bars) are available as optional extras, but in our view neither is a must-have.

Visually, the GTS is distinguished from the rest of the Carrera family by its smoked rear lights, plus the centre lock wheels and some minor styling tweaks. 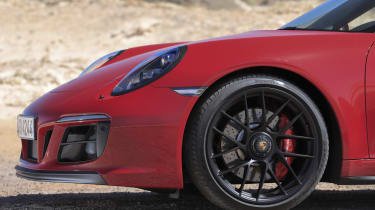 Inevitably, the 4 GTS Cabriolet is no match for the brilliant rear-wheel drive Coupe in the fun-to-drive stakes. The structure remains reasonably stiff given the roof has been sawn off, but you can feel it shudder and see the windscreen surround rattle when you drive quickly over rough road surfaces.

What’s more of an issue is the steering, which is direct and responsive in the Coupe but a touch woolly and imprecise in this car. There’s also an underlying sense of inertia and lethargy in the way the Cabriolet changes direction, a small amount of float and wallow as the road bends this way and that where the Coupe is razor sharp.

It’s a matter of degrees, though, and only in a back-to-back comparison is the Cabriolet shown up in any way by the Coupe. The drop-top model still has enough agility, composure, damping quality, grip and body control to find its way up and down a mountain pass at enormous speed, and it is still fun and rewarding to pedal quickly.

The PDK transmission is just about as effective as paddle-shift gearboxes get, but it does seem like a shame not to have a lever and third pedal to work with in an open top sports car. Very few buyers will ever agree with that sentiment. Four-wheel drive 911s, meanwhile, can be every bit as entertaining as rear-wheel drive versions to drive on a circuit, if not more so, but on the open road the extra weight and added security of the all-wheel drive system do make the car feel a little flat-footed. Again, it’s a matter of degrees.

Naturally, this turbocharged 3-litre engine doesn’t get close to troubling the previous normally-aspirated unit for soundtrack and delivery, but it is one of the most linear and responsive turbo engines on the planet. It revs well to the limiter at 7400rpm and it delivers massive overtaking punch, too. 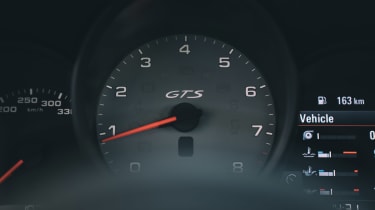 Equipped with the PDK transmission, the 4 GTS Cabriolet costs £110,961. That’s a huge sum of money for what still is a 911 Carrera. Still, certain of its rivals are more expensive still, such as Jaguar’s F-type SVR Convertible. The V8 bruiser costs £115,485, and although it’s much more powerful than the Porsche it’s significantly heavier and not as enjoyable to drive.

Audi’s R8 Spyder, meanwhile, is perhaps even more polished dynamically than its German counterpart, but at £131,140 it’s priced more in line with the 911 Turbo Cabriolet.