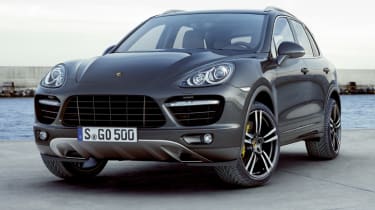 This is the all-new Porsche Cayenne. It might not look drastically different to before (from the front, at least) but there are big changes under the skin. The big talk is of ‘increased efficiency’ and ‘reduced environmental impact’, not phrases you’d traditionally associate with the Porsche-badged SUV. It’s thanks to the real headline-grabbing change – the introduction of a hybrid powertrain. It sees a supercharged 3-litre petrol V6 mated to an electric motor (which is slotted between the engine and gearbox), offering up a 375bhp and 428lb ft total. The latter is available from an astonishingly low 1000rpm. It combines that performance with 193g/km carbon emissions and a combined 34.4mph. Comparable figures to a Renaultsport Clio 200, but from a two-ton off-roader. Not bad going at all. The rest of the Cayenne range is pretty much ‘as you were’, a 236bhp diesel V6 and 296bhp V6 petrol kicking things off and a 395bhp 4.8-litre V8 Cayenne S and its 493bhp twin-turbocharged sibling topping the range. Even the Turbo boasts impressive looking fuel economy; a claimed 27.6mpg on the combined cycle, a 23 per cent improvement on before thanks to the fitment of an eight-speed Tiptronic auto and stop-start technology. It’ll be interesting to see how achievable that figure is – our Cayenne Turbo long termer averaged 17.3mpg in its time at Evo Towers. Other aids to efficiency include lighter weight across the range thanks to new materials and an overhauled all-wheel-drive transmission, saving up to 180kg depending on the model. It’s despite the Cayenne being bigger than before, though the more compact, tauter styling would easily make you think otherwise. UK sales begin on May 29, prices starting at £41,404 for a basic petrol V6 and hitting £81,589 for a V8 Cayenne Turbo. The hybrid will set you back just shy of £58K. As per usual, you’ll get a driver experience day at Porsche’s Silverstone base on the house. We’ll get to meet the new Cayenne in person at the Geneva motor show. Full Geneva roundup here Grab a copy of evo 142, on sale Weds March 3, for a tech lowdown on the new Cayenne Hybrid