Porsche's Leipzig plant has been running for over ten years now, churning out over 100,000 Cayennes in the process 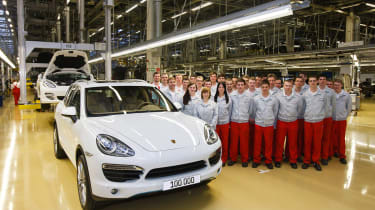 Ten years since the revolutionary Leipzig production facility opened, Porsche has completed the 100,000th second-generation Cayenne. The Pure White Cayenne is destined for its new owner in Brazil - an indicator of how much of an international success the Cayenne has been for the company.

Porsche sells the Cayenne in over 124 countries, and since the first generation Cayenne (2002-2009) went on sale, has produced over 360,000 high-performance SUVs. The Leipzig plant is also home to Panamera production, and because of the consistently high demand for the Cayenne and Panamera, Porsche will be introducing a third production shift in Leipzig at the end of January, upping car production to over 500 vehicles a day.

Wolfgang Leimgruber, member of the Porsche Production and Logistics board commented: 'The introduction of a three shift operation is only one of many challenges in the near future. Building work for a major expansion of the plant is currently underway. A paint shop and body assembly line for an entirely new model line that will start to come off the Leipzig production line from the end of 2013 onward are among the facilities being built on a 17 hectare site. Porsche is investing a total of 500 million euro in the production site in Saxony for assembly of the Cajun, creating more than 1,000 new jobs.'

Siegfried Bülow, President and Chief Executive Officer, explains: '2012 will therefore be an eventful and exciting year in many respects. We are welcoming many new employees, holding topping-out ceremonies on the new site, celebrating the 500,000th Porsche “Made in Leipzig” and last but not least the tenth production anniversary.'