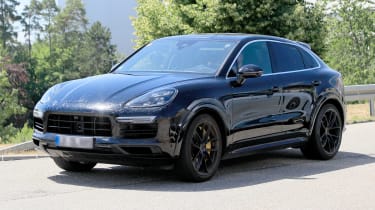 Porsche has been spotted testing its upcoming Cayenne Coupe. This is the first time that Porsche has ventured into this very contentious marketplace, but thanks to the talented third-generation Cayenne wagon, it could turn out to be one of the more impressive sporting pseudo-SUVs yet.

Designed to rival the BMW X6, Mercedes GLE Coupe and Audi Q8, the new Cayenne Coupe will likely borrow heavily from its more upright sibling, riding on the same set of underpinnings that are already spread across the Volkswagen Group’s large SUV portfolio. Already on this platform are the Lamborghini Urus, Bentley Bentayga, Volkswagen Touareg and aforementioned Audi Q8, just to name a few.

> Click here for our review of the new Porsche Cayenne Turbo

Judging by the current Porsche Cayenne, the Coupe is likely to include a combination of turbocharged V6 and V8 engines, while a set of e-hybrid powertrains will also be included. Porsche’s suite of dynamic aids, such as rear-wheel steer, adaptive anti-roll bars and three-chamber air suspension are suspected to be included too, befitting Porsche’s flagship SUV model.

It doesn’t seem like the Coupe will look all that different to the Cayenne, either, sharing a similar front end offset by a softer, sloping roofline that tapers to a heavily raked rear screen and horizontal rear lighting feature. Despite Porsche’s best efforts, the disguise on this test car only just hides the sleek profile, made only more obvious by its shorter rear overhang. Hiding behind new 911 GT3-esque wheels are the obvious yellow brake calipers, indicating the use of carbon-ceramic brakes; useful on a car that’ll easily break a 2-ton weight figure.

Porsche’s new third-generation Cayenne is without doubt an impressive vehicle. It’s one of the best examples yet of a large SUV handling with a level of finesse and poise not usually associated with a high-riding vehicle. This should give Porsche a strong place to start in developing this contrived type of car, and with a marketplace easily accessible for the brand, Porsche’s Cayenne Coupe will likely come with profitability, and not necessarily capability, as one of its core deliverables.