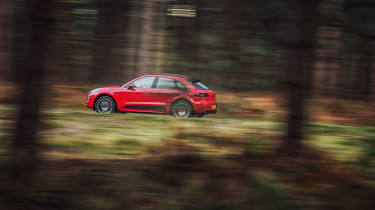 Of all the crossovers and performance SUVs we’ve driven, the Macan does the best job of disguising its size. At times, it feels not unlike a big hot hatch, doing a great job of delivering interaction and performance that you’d normally expect in a smaller car.

This is largely helped by the Macan’s steering, which is a cut above the competition’s. With plenty of weight and, crucially, some proper feel and interaction when you need it, it almost feels out of place in a five-seat 4x4.

Rather than opting for a super-light steering setup, which many SUVs use in an attempt to hide their weight, Porsche has instead engineered a system that genuinely makes the car exciting to drive, but never leaves it feeling cumbersome or unwieldy. Combined with strong grip levels, you have the confidence to drive the Macan a lot harder than you would a conventional quick SUV. 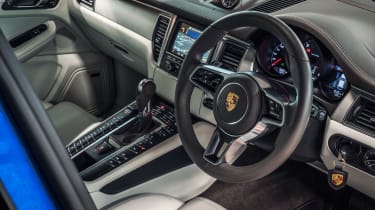 Problems can arise, though, when the Macan simply can’t do any more to disguise its mass. That sharp front end and impressive traction can quickly melt into understeer should you overstep the Macan’s dynamic envelope.

As for the ride, the steel-sprung PASM setup (standard on the Turbo and GTS, ir is a £785 option on the other models) is more than acceptable for daily driving when in its Comfort mode, but those expecting a softened-off luxury 4x4 may be slightly thrown by how much stiffer the Macan feels when in its Sport setting. In fact, if you want an SUV for wafting about in, you may find a Range Rover Sport an altogether more comfortable option. But those who want a more exciting drive will find the Porsche’s body control and stability a cut above.

Ultimately, though, the Macan feels a balanced and well-executed performance SUV. Grip levels and outright pace are also very impressive, particularly in the Macan Turbo, which feels quick enough to easily stay with a properly sorted hot hatch.

The Macan GTS is an altogether different beast however. It uses Porsche's PASM suspension, which is lowered a full 15mm compared to the standard suspension and re-tuned for greater aplomb in the corners. 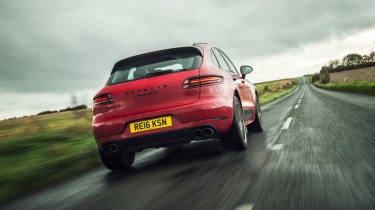 With stunning lateral grip and almost imperceptible delay, the small SUV slices into bends with all the alacrity of a car half its height. It’s really quite shocking. The surprises keep coming too, as a Macan GTS with PTV (Porsche Torque Vectoring) Plus will actually power oversteer if you’re brave enough. There is a perhaps a sense that the car is ruthlessly bludgeoning the laws of physics into submission rather than deftly bending as a lighter car might, but nonetheless it’s a deeply impressive display.

Porsche have done a superb job refining the GTS's chassis so that you can actually enjoy punting it along a fast B-road, but don’t be fooled into thinking that it’s more enjoyable (or spacious) than a good fast saloon or estate. In terms of class performance, it’s at the top of the tree for driving thrills - but an equivalent 355bhp touring (from Alpina for instance) is a better steer.

'The Macan Turbo is the only SUV that I’ve ever really enjoyed driving at speed. Porsche launched this car at its Leipzig factory and we were invited to drive the car on the short test circuit. In the morning the circuit was damp and the Turbo would actually powerslide through the corners, thanks in part to its torque vectoring system. That’s completely irrelevant in the real world, of course, but it does speak of a level of agility that marks the Macan out from its rivals.' - Dan Prosser - Road test editor