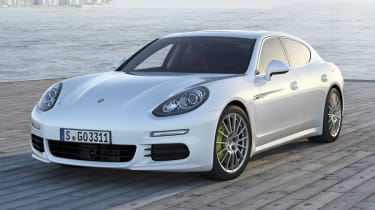 The Porsche Panamera has been updated for the 2014 model year. The sports saloon gets cleaner styling – especially at its rear end – and some new drivetrains, including a headline-grabbing plug-in hybrid version which promises up to 91mpg and sub-100g/km CO2 emissions. That puts it on par with two-cylinder superminis. Marrying a 3-litre V6 petrol engine with a 94bhp electric motor, the Panamera S E-Hybrid produces 410bhp and can hit 62mph in 5.5sec, on its way to a 167mph top speed. These figures make it notably faster than the outgoing Panamera S Hybrid (which couldn’t be plugged into the mains) despite the new car offering a drastic 56 per cent improvement in claimed fuel economy. It will also manage up to 22 miles in electric-only mode, claims Porsche, with a top speed of 84mph in this scenario. Further cleaning up comes via the regular petrol Panamera S and all-wheel-drive Panamera 4S; their 4.8-litre naturally aspirated V8 is replaced by a 3-litre twin-turbocharged V6 engine with more power and torque (414bhp and 384lb ft versus 394bhp and 368lb ft) and an 18 per cent improvement in fuel economy, which now tops 26mpg. Eight-cylinder power continues in the Turbo and hardcore GTS models, with a new Turbo S arriving in 2014. A new 296bhp diesel-powered Panamera also debuts next year. Most Panameras get Porsche’s seven-speed PDK twin-clutch gearbox, the E-Hybrid and Diesel getting an eight-speed Tiptronic S. It appears the six-speed manual gearbox has been phased out, which would be little surprise considering its niche appeal in the luxury saloon sector. For some people, though, the Panamera’s styling was crying out for an update most. Porsche has tidied up the front with influences from the 2012 Panamera Sport Turismo concept and the option of LED headlights, while there’s a bigger overhaul at the rear with new taillights, a smoother bootlid and the relocation of the number plate to the bumper. It’s a facelift rather than a full restyling, so it’ll be interesting to see if Porsche has appeased its saloon’s critics. A new Executive option extends the wheelbase 150mm and adds air suspension, improving rear space and ride comfort, though this won't make it to the UK. The new Porsche Panamera gets its full unveil at the 2013 Shanghai motor show on April 21, in keeping with its appeal to Eastern markets (who are likely to lap up the new long wheelbase option). Sales start in July 2013, with prices in Germany ranging from 81,849 euros (around £69,500) for a Diesel to 163,364 euros (c£138,000) for a Turbo Executive, the Panamera S E-Hybrid costing 110,409 euros (c£93,500).