"4+1" seating, extra luggage capacity and a clever active spoiler are among the perks of Porsche's new Panamera Sport Turismo wagon 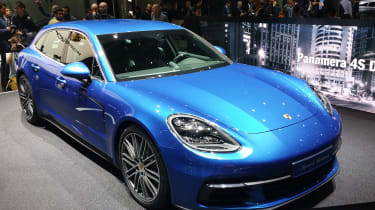 Porsche has revealed the production version of the Panamera Sport Turismo, first previewed in concept form back in 2012. It's finally gone on display in the metal at the 2017 Geneva Motor Show.

Based on the current generation Panamera but featuring new metalwork from the B-pillar back, the Sport Turismo gives Porsche buyers, and indeed buyers of luxury vehicles, another more practical option without recourse to SUV ownership.

Porsche bills the Sport Turismo as a "4+1", but while this puts in mind images of a single rear seat in the luggage area in addition to the four normal chairs, it's actually just a clever way of highlighting a new central third seat - the first such option in a Panamera. 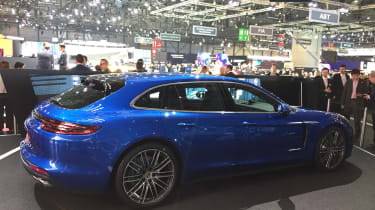 Otherwise, customers can still specify the Sport Turismo with four seats (and no plus-one), with both rear items being electrically adjustable. Either way, rear headroom will be an improvement thanks to the new car's higher roofline at this point than the standard Panamera.

Equally, luggage space has improved, albeit by only 20 litres. That raises the total to 520 litres, and while you won't be squeezing in any wardrobes or white goods, the extra space should make continental jaunts a little less of a challenge.

The seats can, of course, be folded to liberate even more space (up to 1390 litres) and Porsche is pushing the versatility factor with a luggage compartment management system, with floor rails, lashing points and a dividing net. The forward cabin is like that of the standard car, with a clean, modern design and near universal use of touch-sensitive controls. 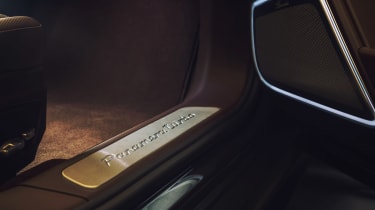 The E-Hybrid loses some luggage space (it gets 425 litres seats-up and 1295 litres folded) but will attract those keen to dodge the tax man, while the Turbo will attract blue flashing lights if drivers fail to exercise the proper restraint. No weights are quoted, but performance should be similar to that of the regular Panamera: for the Turbo that means 0-62mph in 3.8sec and up to 190mph.

In common with the Panamera, the Sport Turismo features active aerodynamics. A three-stage adaptive spoiler sits atop the tailgate, producing up to 50kg of downforce at its greatest angle of attack, though you'll need to be doing more than 106mph to engage it in normal driving, so those blue lights will be even more forthcoming. 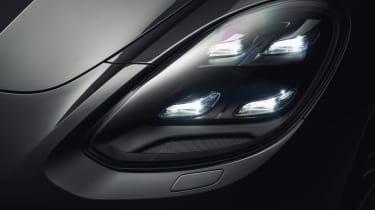 Unless you're in Sport or Sport Plus mode, that is, when the spoiler is called upon north of 56mph instead. Uniquely, the spoiler can also be used to minimise wind noise when the panoramic glass roof is opened.