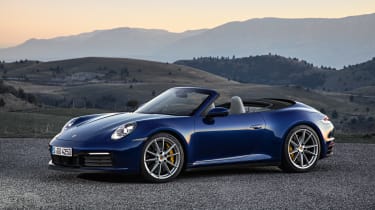 The 992’s second act is here with the all-new Porsche 911 Cabriolet making its debut before joining the line-up in a few months time. Sharing the 992 Coupe’s all-new body and chassis, the next 911 Cabriolet is promising to retain the Coupe’s impressive dynamics, despite having its roof removed.

Initially available in the same Carrera S and Carrera 4S variants as the Coupe, the range will expand with the Coupe as more models, such as the standard Carrera, GTS and Turbo, appear over the next 12 months. Constructed on the new MMB platform, Porsche claims the Cabriolet will have improved overall body stiffness over it already sturdy predecessor, thanks to a combination of a reinforced structure with additional strengthening braces along the floor and firewall section, as well as core structural gains thanks to the new engine mounting points closer to the car’s centre of gravity.

As a result, the 992 Cabriolet is the first open-top 911 to be available with the Sports PDCC Chassis option, something previously reserved for hard-top and Targa 911s. As with the Coupe, both rear- and all-wheel drive 911 Cabrio models now share a single body. Designers have purposely worked hard to maintain the Coupe’s silhouette, but roof-down, the result - like all wide-bodied Cabrios - can look a little oddly proportioned from some angles, something only accentuated by the simple rear styling of the 992. Porsche has not disclosed the expected weight gain compared to the Coupe, but judging by the weight difference seen between body styles in the 991, we’d expect an addition of 80kg or so. 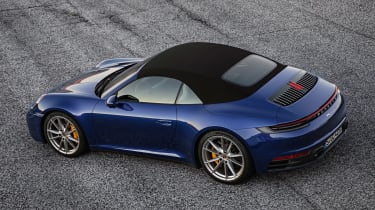 The new 911 Cabriolet’s roof is a powered unit, raising or lowering in just 12sec at up to 31mph. The fabric unit now features magnesium structural elements, giving the usually soft roof extra definition, in part to keep it from ‘ballooning’ at extremely high speeds - something of more use on German Autobahns, no doubt. When stowed, the roof sits neatly within its coverless shroud, doing without a full tonneau as per traditional 911 Cabriolet models.

The new Cabriolet is otherwise identical to the new Coupe, sharing its 444bhp 3-litre turbocharged flat-six engine and eight-speed PDK dual-clutch gearbox. A manual is expected to be available in time. The new Cabrio’s performance is only 0.2sec behind the equivalent Coupe model, with times ranging between 3.9sec for the basic S and dropping to just 3.6sec for the 4S when fitted with the Sports Chrono package. The Coupe’s natty ‘Wet Mode’ will also be included, not to mention the swathe of optional driving tech like rear-wheel steering, PDCC active anti-roll system and active aero.

> Click here for more on the upcoming Porsche Taycan

The interior is also shared, with a vast upgrade in tech and presentation. The new dashboard’s central 10.9-inch infotainment screen has a significant boost in functionality, while extra driver information is now able to be displayed on the two driver displays either side of the pleasingly analogue tachometer.

Available to order now from Porsche dealers in the UK, prices will start at £102,755 for the Carrera S Cabriolet, a £9645 premium over the Coupe, while the C4S starts at £108,063. Deliveries will commence in Q2 of this year.