Porsche’s 911 Carrera S Cabriolet gets new turbocharged flat-six and improved performance, and is the best 911 Cabriolet to date. 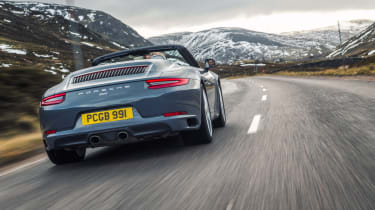 As with the rest of the gen2 991-series Carrera line-up, the new Cabriolet benefits from the same model-year updates as its coupe counterparts, which means there’s a new bumper design, new LED daytime running lights and revised rear lights, a new engine cover with vertical cooling slats and, as fitted to our test car, an optional centre-exit sports exhaust system. There are also new door handles if you notice such things.

Inside there are some very subtle tweaks to switchgear, but the interior is pretty much untouched. The big update is a new infotainment system featuring Connect Plus and Apple CarPlay.

911 Cabriolets have never been our number-one choice of rear-engined Porsches, but this doesn’t mean the soft-top 911 has fallen short when it comes to driver engagement, thrills and rewards. Few cars make the transition from coupe to Cabriolet as well as the 911 does. 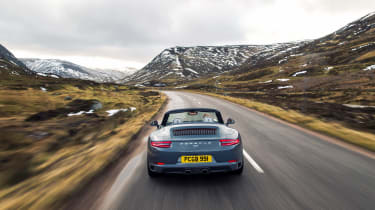 The new engine has been well documented by evo, and in the Cabriolet it’s identical to the motor as fitted to the coupe, which means all 414bhp arrives at 6500rpm and 369lb ft of torque is available from 1700 through to 5000rpm. The seven-speed manual gearbox is standard, and is fitted here, which means a claimed 0-62mph time of 4.5sec and a 190mph top speed.

The Carrera S features PASM (Porsche Active Suspension Management) as standard, which also lowers the ride height by 10mm, and the standard Sport button adjusts the throttle mapping, damper settings and, if fitted, the PDK shifts.

Manual cars are equipped with Porsche Torque Vectoring and a mechanical locking rear diff; PDK cars get PTV Plus with an electronically controlled diff.

Cast-iron discs are standard, with six-piston calipers at the front, four at the rear. Porsche Ceramic Composite Brakes are available as an option. 20-inch wheels with 245/30 (front) and 305/30 (rear) tyres are standard fit. 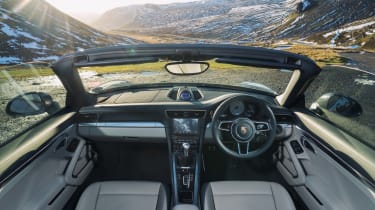 As with the coupe, the switch to turbocharging hasn’t thrown away 60-plus years of 911 heritage, rather it starts a new chapter in the car’s remarkable history.

The lengths Porsche has gone to make its new 3-litre turbo unit sound and feel like a naturally aspirated engine should not be dismissed lightly. The flare of revs on start-up will be a bit OTT for some, but it drives the message home that this is still a flat-six engine.

What strikes you first is how quickly the engine builds speed and the revs climb. There’s no turbo lag to report and once the engine’s peak torque becomes available at 1700rpm, the acceleration takes on a linear, seamless pull, with the tacho racing to the red line that’s just short of 8000rpm.

But to get the best from the engine you need to exercise that tacho and keep it above 5000rpm, otherwise you find yourself driving on the engine’s torque curve, denying yourself that flat-six fizz. Ride the torque wave and you’ll short-shift around the manual gearbox, too, eventually skipping ratios and again denying yourself the full 911 experience. And while the seven-speed manual is improved, once again it’s still not as sweet shifting as the six-speed manual gearbox found in Porsche’s mid-engined cars.

In Cabriolet form the gen2 991 has a further layer of polish over the car it replaces when it comes to driving and dynamics. The electric power steering has been improved upon further still: it still lacks initial feel on turn-in, but once you’re into the corner you can position the car with clarity. With speed comes confidence feeding through the helm, and combined with the traction the 911’s chassis manages to generate you can find yourself travelling at far greater than expected speeds. And this series of 911 Cabriolet has better body control than any iteration that has gone before. Scuttle shake is all but eliminated, there’s only the slightest hint of flex through the shell when you hit a vicious bump or series of undulations, and it’s a far easier car to balance with throttle and steering inputs than before. 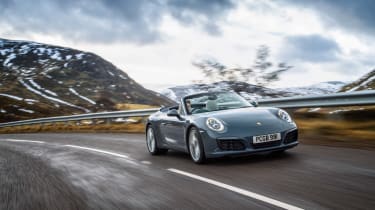 Maserati’s four-seat GranCabrio is a closer match at £98,940 and 434bhp, but it lacks the dynamic repartee of the 911. Like the Jaguar, Mercedes-Benz’s new SL offers only a two-seat option, but it will deliver the sophistication the F-type lacks, while BMW’s 6-series Convertible sits somewhere between the two.

Watch out for options. Porsche 911s are no longer the affordable sports cars they once were and it doesn’t take much to add a five-figure sum to the list price. A sports exhaust is £1773, the Sport Chrono Package £1125, LED headlights another £1764, and the Bose stereo, which you’ll need if you want to hear anything from the new infotainment system with the roof down, costs a further £963. Our test car came in at £103,592 and no matter what planet you live on, a 911 Carrera S Cabriolet is not a six-figure car. 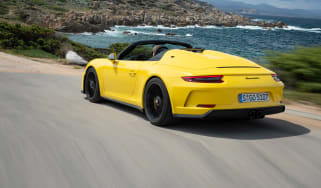 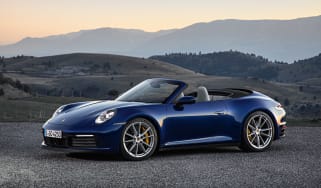 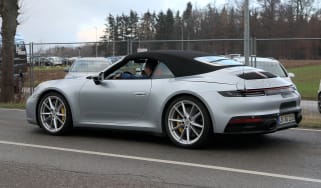