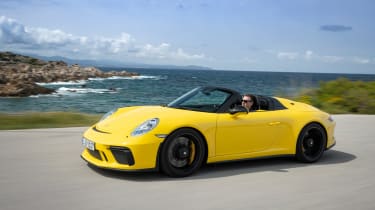 Porsche’s legacy began 71 years ago with a car called Roadster Nr.1, a mid-engined two-seater that owed a great deal to the VW Beetle. And a large proportion of its survival and subsequent success in the United States can be put down to the first Porsche Speedster. Based on the 356, it was a cheaper, faster access point to Porsche’s line-up built to meet a price point set by Max Hoffmann (the official Porsche importer to the US) in order for him to grow his fledgling Porsche concession.

It was a formula that would provide an instant hit, not only with customers looking for a cheaper Porsche road car, but club racers too, looking for an affordable, but still competitive race car. Which makes it all the more perplexing that Porsche reserves the Speedster name for the most limited of special edition models, rather than make it a mainstay of the range as a reminder of its origins.

Restricted to only 1948 examples (the year Porsche’s first road car was made), Porsche’s newest Speedster costs £211,595 and is already sold out. Those fortunate enough to have their name assigned to one of the individually numbered examples are very lucky, indeed, for this is one of Porsche’s finest. 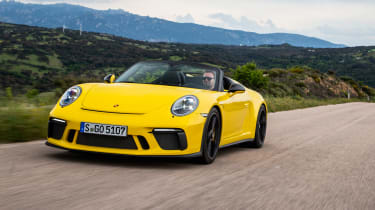 Where to start. The current Speedster project started in 2013 when the head of Porsche’s GT road car division, Andreas Preuninger, tasked his design team to think about an open-roof GT3 with the lowest fly line possible. The resulting sketch was considered internally an instant hit, with the decision made that the car would be the model to celebrate the company’s 70th anniversary in five years’ time. Those five years were time well spent.

For the front of the original concept Porsche had used a gen-1 991 GT3 married to the rear of a Carrera 4 Cabriolet (Carrera 4 shells are inherently stiffer), the exercise proving relatively straightforward. The only small hiccup being the Speedster would need to be based on the forthcoming gen-2 GT3, which had yet to start its development. Still, there was plenty more to be getting on with.

The body panels, for example. The front bonnet, rear deck and front wings needed to be designed and manufactured in carbonfibre. A bespoke canvas roof also required designing and engineering to meet the weight and packaging requirements set out by Preuninger. Hence why the roof’s only electronic interaction is for the release/latching to the windscreen header rail (which in traditional Speedster style is lower), the rest of the process requiring manual intervention to lift the rear deck out of the way and fold the roof into the area where you’d expect to find a 911’s rear seats.

Beneath the lighter body (the Speedster registers 1465kg on the scales) are the same springs with the same spring rates as on the GT3 despite the Speedster having 20 per cent less body rigidity. The latest two-stage adaptive damper technology, that Preuninger claims makes the Speedster such a good road car without sacrificing its performance, are also fitted, so too rear-axle steering, torque vectoring and a mechanical limited-slip differential. There is also a pair of lighter MacPherson struts for the front and a lighter multi-link set-up at the rear. Porsche’s carbon-ceramic brakes are standard (410mm and six-pots on the front, 350mm and fours on the rear), with 20-inch wheels and Michelin’s Pilot Sport Cup 2 tyres. 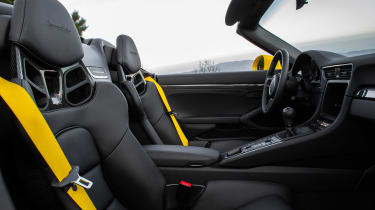 Lifted wholesale from the GT3 is Porsche’s 4-litre naturally aspirated flat-six, that, exhaust and the fitment of a dual-mass flywheel aside, is the same unit you will find in the back of the company’s Carrera Cup race cars.

A particulate filter to meet current emission regulations has also been installed, but rather than an expected drop-off in peak power, Porsche has found another 10bhp, lifting that peak to 503bhp. Torque remains the same at 347lb ft.

> Click here for our review of the McLaren 600LT Spider

With only a six-speed manual gearbox offered, the sprinting times may not impress those who live and die by zero to 62mph times, but 4.0sec is not to be sniffed at, nor the eight seconds required to reach 100mph. Flat out? 192mph, which is plenty for most commutes, and no, Porsche hasn’t set a lap time at the Nürburgring. Not yet, at least. 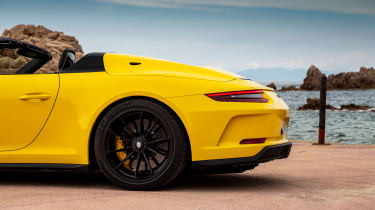 Duck under the low roof line, fall into the carbon-backed bucket, insert the key into the ignition barrel to the left of the 310mm steering wheel. Left foot on the clutch, right hand on the gear lever. Twist the key. Listen for the whirr, watch the tacho dance to its 1000rpm idle.

Depress the switch in the centre console to release the roof from the header rail. Pull on the nylon strap of the lightweight door card to open the door. Get out. Walk to the back of the car and open the rear deck and pull it back, and towards you. Take the roof and fold it back into position, give the deck a firm shove to allow its catch to latch. Walk back to the driver’s door, spot the neat storage hole behind the seat. Get in. And think. Think there is something missing. A sense, a feeling… no, the clatter of the GT3’s single mass flywheel sounding like a brick doing its best to ruin a Miele washer-dryer is absent. That’s it. Shame. It’s also the excuse you give for stalling.

But it doesn’t matter, because every other GT3 sensation is there. That thought you have about the gearing being too short before you tell yourself to stop changing up at 6000rpm when there’s another 3000rpm to go. The first kick at 3000rpm that spikes your senses, the second at 6000rpm ramming home the full force of a Porsche Motorsport motor. The first time you run up through second, third and fourth the Speedster snares you. Resistance is futile, it’s such a raw, pure experience you could stop now and be content. But that would leave you missing out on the Speedster’s fuller offering. 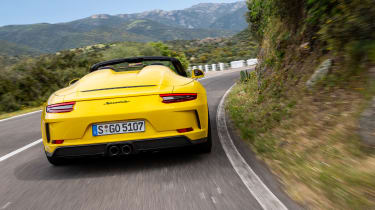 Across any given surface the suppleness to the Speedster’s chassis is like no other GT3-style car. There’s no kickback through the steering, no wriggle of the hips over lumps and bumps, but there is just the right amount of lean (still not much) to push against when you want those Cup 2s to bite hard into the tarmac. It inspires confidence in every situation. It might be slower on a circuit – it lacks the downforce of a GT3 and that 20 per cent increase in the coupe’s rigidity allows you push it harder and receive even greater rewards – but on the road the Speedster’s flow and precision is as impressive as the GT3’s fierce focus is on a track. The new car has that feeling of working with the surface 100 per cent of the time, instead of fighting it some of the time.

Porsche’s latest electronic power steering remains a great tool to work with, bleeding in the feel as you apply lock, synced with precision to the rear axle to provide that balance between a quick and pointy front end and a progressive rear. It feels very much like a 911 R, rather than a GT3, which is no coincidence considering that’s exactly what Porsche was aiming for.

Roof down there’s less buffeting than in a regular cabriolet, and when its closed there’s no unwanted din, but in both circumstances it could sound better, but that’s particulate filters for you.

911 Speedsters are not traditionally the 911 of choice for those who enjoy driving far more than they enjoy being seen driving. But this Speedster is different. It’s a driver’s car first and foremost, that so happens to have a distinctive and unique look about it. It’s not only the very last 991-generation 911, it’s also one of the very, very best.