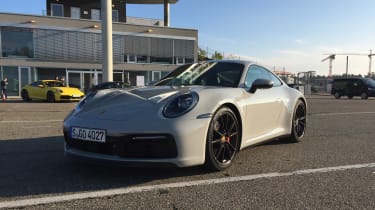 Porsche’s all-new 911 was revealed at the LA motor show in November, but it’s only now that we’re able to gain a full understanding about the work Porsche has put into its performance flagship. Based on an all-new platform, with a new gearbox, interior and heavily revised engine, it promises to be more than just an update, instead taking Porsche’s rear-engined range-topper into the future.

The new 911 is based on a fresh modular platform developed by Porsche for its sports car range. Also new is the interior, and the way the driver interacts with it, but all the while Porsche is adamant that driving interaction and pleasure have been core to the new 911’s development.

The new car will also eventually spawn the first hybridised 911 model, but how much battery and electric motor intervention will eventually be applied is still being kept close to Porsche’s chest. Available to order now, prices start from £93,110 for the Carrera S and £98,418 for the Carrera 4S. But before you spend the day on the Porsche configurator, here is an in-depth look at the new 911. 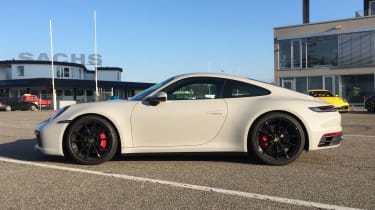 For the first time since the 993 generation, Porsche’s rear-engined sports car will once again be offered in only two body sizes. Unfortunately one of these won’t be a narrow body, but rather a size more akin to the wider shell that had previously been the preserve of the Carrera 4, GTS and standard GT3 models. Porsche has also widened both the front track and the front fenders by some 45mm to create a far more cohesive design while improving front-end grip, stability and traction.

Overall length is around 20mm up compared to the 991.2, however the wheelbase has remained the same. Underneath the new skin is an all-new MMB platform, designed and engineered by Porsche. The platform will not only underpin the 911 and its numerous incoming derivatives, but also the next Boxster and Cayman. The modular bit of this new platform is everything behind the front bulkhead, with the floor and rear sub-frames able to be modified to suit rear- or mid-engined applications. 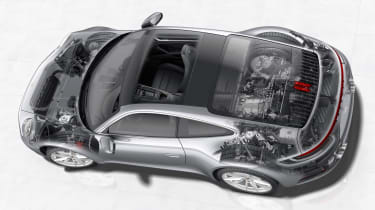 The 911 is still constructed from a combination of different steels, high-strength steel and aluminium, and now features a total of 13 per cent cast aluminium components within the chassis, a four per cent increase on the 991. The 911’s exterior body skin is now also aluminium, while the roof is now to be specified in a variety of materials, such as glass or carbonfibre, with an aluminium skin standard, and magnesium once again likely to be used for future 911 GT models. The overall weight has gone up marginally, but the body-in-white is actually lighter than the 991 that went before.

Porsche has also promised a third different model will be built off the new MMB platform within the Porsche line-up, and be used outside of the Porsche model range, too. Will this be a future McLaren 720S  rival? We can only speculate at this stage.

At launch, Porsche will only release the more powerful Carrera S and Carrera 4S, both using a significantly revised version of the same 9A2 3-litre twin-turbocharged flat-six engine, now known as ‘9A2 evo’ (thanks Porsche).

Power is quoted at 444bhp, with 406lb ft of torque available between 2300 and 5000rpm – 150rpm higher than before, but made up for with shorter gear ratios, according to Porsche. These figures match the outgoing Carrera GTS. But the engine is not the same unit as the previous GTS, with significant work put into how the engine breathes. Fitted to the flat-six are two new turbochargers with optimised intakes to keep the performance completely symmetrical on both turbos, something not managed on the 991.2 thanks to packaging constraints. 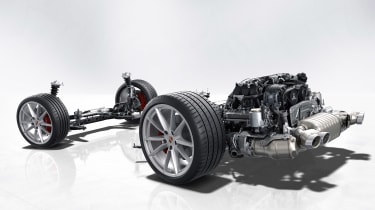 This is – in part – due to the work done on the 911’s charge air-coolers, which have been moved from the area under the rear lights to the space above the muffler. This change in plumbing, aided by a new cast manifold has allowed Porsche to de-stress the turbo components, ensuring that the full 444bhp (and a whole lot more in future variants, no doubt) is available consistently, no matter the conditions or altitude.

Added to the new turbos are the latest particulate filters and a new exhaust system. This newer engine outperforms its predecessor in terms of acceleration (3.6sec and 3.7sec 0-62mph times for the PDK Carrera S and Carrera 4S models are 0.4sec quicker than their predecessors), top speed (190mph or 191mph depending on the number of driven axles) and fuel economy and emissions. A lower-powered version of the engine will be introduced early in 2019 for the Carrera and Carrera 4 models. 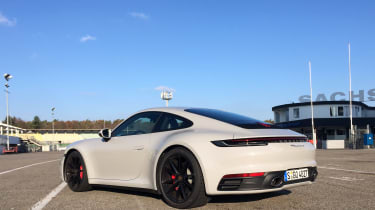 While the engine has been through an incremental update process, the PDK gearbox is all-new. Despite gaining an additional ratio and many of the mechanical elements having been replaced with more packaging-friendly electronic components, including the shift mechanisms, it’s the same physical size as the outgoing unit. However, if you were to open it up you’d discover an unoccupied area for the electric motor required for any of the hybrid plans Porsche has for the 911 in four years’ time. The new PDK is rated to 590lb ft of torque, 37lb ft more than the current GT2 RS – a possible ceiling figure for the next GT2 RS perhaps?

A fully electric 911 is still some way off, circa 2028 Porsche says. The ratios have also reduced significantly on the first six gears, with seventh and eighth acting as overdrive gears to keep revs low on motorways.

In terms of chassis, the adaptive PASM damper system is once again an option, so too the company’s Sport chassis, the former lowering the ride height by 10mm, the latter by 20mm. Rear-wheel steering, torque-vectoring and a mechanical limited-slip differential will also be available, but it’s the introduction of a further driver mode called ‘Wet’ that’s most intriguing.

Using sensors in the wheelarches the system monitors noise from within and detects if the road surface is wet. When it does so, the stability control and ABS systems are primed accordingly and the driver is notified, allowing them to make the call as to whether they wish to select the wet driver mode – via the rotary control on the steering wheel. Should they choose to do so, the throttle’s response is softened and the Porsche Traction Management system optimised. 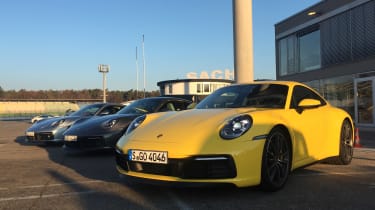 Porsche has also changed the placement of the engine mounts, bringing them in 20mm closer to the rear axle, better controlling the weight over the rear axle under extreme load, and better suppressing vibrations.

A downside for making provision for future hybrid and electric powertrains (the 992’s body has the fixings and mountings for battery packs and motors) is an increase in weight over the 991 of around 20kg. Weight figures stand at 1515kg for the Carrera S and 1565kg for the C4S. But fear not, despite spending a great deal of money on a new PDK unit, Porsche has overhauled its seven-speed manual gearbox, too. Although, like the standard Carrera you’ll have to wait until early 2019 before you can order one.

The 992 will be the first non-GT 911 to be offered with different diameter wheels front to rear, with 2019’s Carrera models to be fitted with 19- and 20-inch rims respectively, the S and 4S models with 20- and 21-inch items, the latter requiring those larger rear wheelarches.

The evolutionary approach to the exterior is the opposite of the new 911’s interior. Few elements have been taken from the recent generations of 911, but the fascia was inspired by the G-Series generation cars, and is home to new retro-designed switchgear and an instrument display that features a centrally positioned analogue rev counter flanked by a pair of TFT screens.

A 10.9-inch monitor sits above the transmission tunnel for the latest infotainment system and is also where you can fine-tune the car’s dynamic technology such as Night Vision Assist and the Emergency Assist system that’s linked to the radar cruise control and offers a low level of autonomous driving in certain conditions. The glass-finished transmission tunnel is very reminiscent of what you’ll find in a Panamera and features a gear selector that only allows you to select reverse, park, neutral or drive. If you want to change gear manually with the new PDK ’box you’ll need to do so with the paddles behind the new 360mm steering wheel. 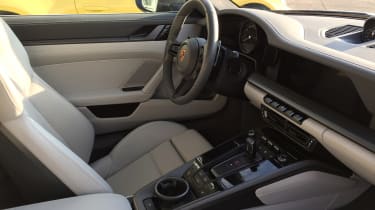 Unless you’re a real Porschephile, one can’t really be blamed for thinking the 911’s design has been rather static over its 55-year history. Look closely at this new model, however, and you’ll see the 992 looks significantly different from the 991, drawing just as much inspiration from the past as it does the future. New for the 992 is the creased bonnet, a design feature that was applied to all 911s right up until the 996, and new LED headlights that are entirely enclosed by the front wings.

The body side has remained free of superfluous detailing, however it’s the rear that will likely strike people as the most dramatic change. What Porsche has done is group all the exterior detailing into three distinct graphics, starting with the rear screen and slatted engine cover grouped into one shape. The small, longitudinal strakes act as the engine cover, housing oil, water and other ancillaries underneath, with the third brake light integrated at its centre. Behind is the dramatic rear light bar, stretching across the car in one sharp blade of red light, sitting atop the rest of the rear lighting elements and Porsche badge. 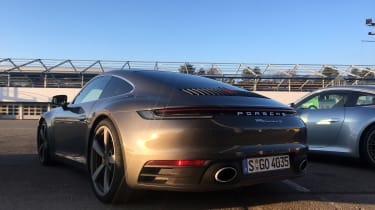 The third graphic at the very bottom of the rear bumper now houses the number plate, exhaust and secondary intake vents, all incorporated into one blackened section. As with the 991.2, the Carrera S’s standard exhaust system has quad tips, with the Sports Exhaust option comprised of two oval outlets (as shown above). The overall effect is very clearly 911, with a subtle hint of homage, but dominated by contemporary LED elements and clean detailing that keeps the basic proportions driven by a model conceived in the first half of the 20th century still looking fresh and relevant in 2018.

That larger rear wing also headlines new, more effective active aerodynamics, shooting up under heavy braking as an air brake. This one aerodynamic change wipes off up to 1.5metres from the stopping distance from 186mph. The front air intakes also have completely movable slats, allowing the ideal amount of airflow into the front-mounted radiators. The front intake slats and rear wing are also utilised in the aforementioned ‘Wet’ mode, increasing downforce to its maximum capability to help avoid aquaplaning. 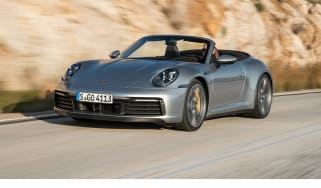