Porsche has snatched back the coveted lap record for road cars at the Nurburgring Nordschleife with an upgraded version of the GT2 RS. The GT2 RS MR, which features Manthey-Racing’s upgrade kit, lapped the circuit on October 25th in 6:40.3 secs with Lars Kern at the wheel, the same driver who set the original GT2 RS lap record (6:47.3) last year. Porsche had lost the record in the intervening period to the Lamborghini Aventador SVJ, which lapped in 6:44.97.

While Kern’s new record wasn’t set with a regular production model as such, Porsche owns 51% of Manthey-Racing, which runs the 911 RSR GTE effort in the World Endurance Championship and also works closely with Porsche Motorsport on the GT3 racers and other projects. It already sells ‘MR’ upgrade packages for the GT3, GT3 RS and Cayman GT4 road cars.

Porsche’s racing and development partner has helped the fearsome 911 GT2 RS to reclaim the Nurburgring lap record - here's the onboard...

The MR package for the GT2 RS consists of various improvements to the aerodynamics and the suspension setup of the car. Porsche is being notably tight-lipped on the modifications, but a larger rear wing has been teamed with ‘canards’ on the front corners for improved downforce. The car is fitted with Manthey’s coilover spring/damper units, and features upgraded brake pads and brake lines, while the wheels are magnesium. An additional water tank (for the GT2’s intercooler water spray system) means the full complement of 691bhp can be used for longer before refills are required. Manthey are set to reveal further details of the kit, along with pricing, in due course. 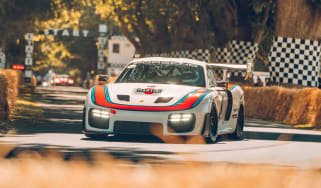